That rule prohibits Santa‚Äôs sleigh from entering the United States with ‚Äúgoods in which Cuba or a Cuban national has an interest.‚Äù 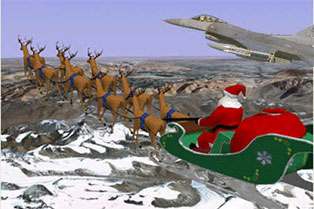 Santa is escorted away by US Airforce

With the economy being bad and still no Obama decision on how to go about our 50 year embargo dilemma with Cuba, this story shows how politicians have complicated Santa’s life and why this could severely backfire for American children this year.

A spokesman for the Treasury Department‚Äôs Office of Foreign Assets Control (‚ÄùOFAC‚Äù) told SearchAmelia this morning that discussions between OFAC and the North Pole over Santa Claus‚Äôs Christmas Eve itinerary had broken down and were not expected to be resumed before Santa‚Äôs scheduled departure on December 24 at 10 pm EST.

The dispute arose from a dilemma that the U.S. sanctions against Cuba posed for Santa‚Äôs planned delivery of toys to children in Cuba. If Santa delivers toys for U.S. children first, there will be toys destined for Cuba in the sleigh in violation of 31 C.F.R. ¬ß 515.207(b). That rule prohibits Santa‚Äôs sleigh from entering the United States with ‚Äúgoods in which Cuba or a Cuban national has an interest.‚Äù
On the other hand, if Santa delivers the toys to Cuban children first, then 31 C.F.R. ¬ß 515.207(a) prohibits the sleigh from entering the United States and ‚Äúunloading freight for a period of 180 days from the date the vessel departed from a port or place in Cuba.‚Äù

A press release from the North Pole announced that the OFAC rules left Santa no choice but to bypass the children of the United States this Christmas. A spokesman from OFAC warned that if Santa attempted to overfly the United States, his sleigh would be forced to land and his cargo seized. He continued, “We know that the outcome is harsh, but we cannot allow Fidel Castro‚Äôs regime to continue to be propped up by Santa‚Äôs annual delivery of valuable Christmas toys to Cuban children.” Congressional leaders had left for the holiday recess and could not be contacted for comment.

Get our Holiday Season eBook and read how to “Celebrate the Holidays with Frugal Flair.” You and your children will be glad you did.
12 chapters and 100 pages chockfull of great ideas, tips, stories, recipes, song, history and fun facts about the Holiday Season. Here are the chapter topics.
I¬†¬† ¬†Saving on Holiday Cards

Get it now. The proceeds go to helping underprivileged children have a great Christmas too.