Sean Costello was on his way to become a Blues Great

Sometimes talent is a blessing, and sometimes it hurts beyond the human power to control. 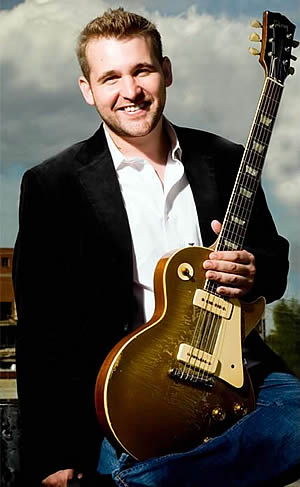 My friend Michael Rotschild dropped by several weeks ago with a compilation CD of an artist that once was one of his most promising prodigies; Sean Costello. Sadly he never made the real break through: Costello died of a drug overdose in April of 2008, just a day short of his 29th birthday.

That death, like so many others, cut short yet another brilliant musical career and a chance for many of us blues fans to see this wonderful talent alive on stage. I would have loved to see this guy headline our Blues Festival rather than listen to a wonderful but bittersweet rendition of “Can I Change my Mind” or the intergalactical guitar work on Johnny Guitar Watson’s “Motor Head Baby”. As it is, I bow my head for a talent of giant proportion, who’s life was cut short by a moment of desperation once beautifully phrased by Don McClean in his masterpiece Vincent (van Gogh’s Starry Night) that said: ‘But Vincent, this world was never meant for one as beautiful as you.’ Listening to Sean Costello I have the distinct feeling that these words were also meant for him.

Of course I had heard Michael talk about Sean Costello previously, but since I was only familiar with a guy named Elvis Costello, I never really had paid any attention to this young blues rocker. I knew he backed Susan Tedeschi on some of her work, but the moment I put on his posthumous Live CD that changed instantly, almost like the epiphany I had when I heard Hendrix play “Hey Joe” in 1968 or so. Nothing short of a lightning strike. In any case I have been listening and watching Sean Costello on probably every video I could find on youTube and have become a great admirer of his very distinctive style of playing his Gibson guitar and a voice that could gravel, growl and turn cotton field clear bluesy from one moment to the next.

Just sorry that I never heard of this magnificent talent until he already had departed this earth in a bi-polar momentary lapse of reason. 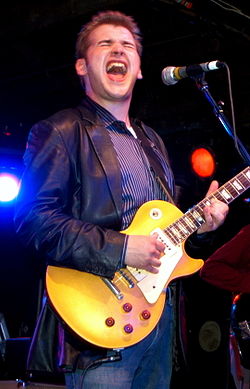 I asked Michael about that and as he shrugged he almost apologetically informed me that at the time of his death Sean was under contract with another recording company; as if wishing he could have prevented the unpreventable if Costello had stayed with Landslide. But Michael knows as well as I do (we’ve both been around the block a couple of times) that talents like Cobain, Winehouse, Hendrix, Janis, Lowell George, Costello and a couple of handful more burn so intense that only straight jackets and 24 hour attention can postpone the otherwise inevitable.
You can recognize it in Costello’s voice and guitar playing. When you remove the barriers, they simply don’t recognize nor care for abandonment or boundaries as they go for broke, they don’t care about structures and rhymes, they are just amazing instruments of the soul, ready to cut you up and deliver the blues message straight into your soul. And then it turns on them instead.

At His Best – Live, a special album of live performances features 16 tracks of all previously unreleased live material recorded in the US and Europe between 2000-2007. It is the long overdue first ever completely live album of Sean Costello performances, including 11 songs not on any prior Costello release. The album is produced by Fernandina Beach resident Michael Rothschild, owner of Landslide Records and was mastered by acclaimed producer/engineer Rodney Mills (Gregg Allman, Atlanta Rhythm Section).

On At His Best – Live, Costello demonstrates without a doubt why he was tagged as a blues artist of immense talent and potential at the age of 16, and how he continued to deliver on that promise up until his tragic death in April, 2008.

I thank Michael for At His Best – Live, because blues fans like me who never got to see Costello perform will hear what all the excitement was about; and for those fortunate enough to have experienced a Sean Costello show in-person, this CD will bring back vivid memories of the energy force that drew audiences from all over the world to this incredibly talented musician.

For more information go to:  http://www.landsliderecords.com or to purchase click Here