Witnessing the birth of the 7 billionth human should ring the bell that we need to seriously start talking about it. 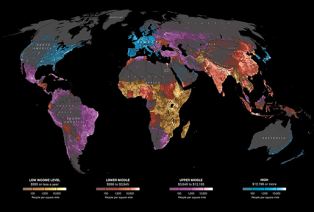 Where the vast majority of people live on our planet

Only four days ago our planet passed 7 billion people and since we’ve added a city the size of Detroit and by this weekend we’ll have added another 2 million people and by the end of the month, the number of babies born on our planet this month will equal the population of Portugal (10.6 million). Frightening? A little bit I would imagine.

In a world where the global economy has not found an answer to an enduring recession yet, our first concern would have to be, will there be enough food and water to sustain 10 billion people sometime during the middle of this century. And no matter how optimistic I am about human creativity to provide answers, I feel a sense of sadness for our children and grand children.
History has shown time and again that nature’s exploitable renewable resources divided by the population number defines the level of sustainability, yet we keep on pro-creating at a rate that potentially already has crossed the earth carrying capacity. We are demanding job creation without realizing that given the technological developments and the rate of population growth, there are simply not enough jobs available unless we drop some of our progress and re-introduce low pay-scale jobs the likes of WalMart greeters and gas pump attendants.

The harsh truth of population versus resource (wealth) sharing was dramatically established during the Plague in Europe between 1348 and 1350 when more than 1/3 of Europe’s population perished, creating the biggest redistribution of wealth in history. Even if we think that we are determined and resourceful enough to overcome any adversity thrown at us, observing the birth of the 7 billionth human should ring the bell that we need to seriously start talking about it.

On the occasion of reaching 7 billion people I watched news interviews last weekend, in which it almost sounded like a celebration of ignorance…wow we’ve accomplished unbridled procreation and now we’re going to show them (?) who’s boss by getting to 10 billion as soon as we can!!
Since it is truly not for me or anyone else for that matter, to dictate how many children someone can have, the only real solution is to give women accessibility to options. Lack of choices is a huge factor in rapid population growth. Millions of unintended pregnancies occur every year; yet at the same time there are millions of women who desperately want to delay or avoid pregnancy, but are unable to do so. Only through family planning education and support platforms choices (availability of pregnancy prevention methods), combined with a departure from politically supported hand outs intended to boost pregnancies, can we truly progress to a sustainable balance.

My friends at Playing for Change , a human initiative that is bringing the world together with the power of music, have produced this magnificent video with musicians from around the world in conjunction with the United Nations Population Fund. It’s about inspiring each other to get involved and join, so we truly leave this world better that we found it. Look into your children’s and grand children’s eyes and make the promise to give them a fair chance.