A watercraft design and fabrication company in Northern California, launched their latest and most advanced submersible watercraft. 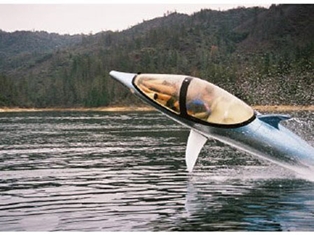 Innespace Productions, a watercraft design and fabrication company in Northern California, launched their latest and most advanced submersible watercraft: The Seabreacher X. This exciting new version is based on the dolphin inspired Seabreacher J that the company has been selling for the last two years. The X model sports a more aggressive Shark style body as well as upgraded interior treatments. The X model also steps up the performance envelope with a 260hp supercharged engine, propelling the vessel to a top speed of 50mph on the surface and 25mph below.

“This is the vessel we’ve always wanted to build,” says company co-owner Rob Innes. “The power and agility of this vessel is insane!”

The new shark design grew out of necessity as much as aesthetics; the higher output engine required more air intake than the main snorkel (mounted in the vessel’s dorsal fin) could provide, so they added an additional snorkel in the shark style tail. The new drag-boat style wrap-around canopy was primarily designed to reduce heat build up in the cockpit. This, combined with the gaping jaws, give the whole vessel a far more menacing presence. 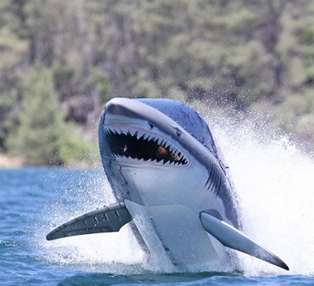 The new boat can sustain high speed dives and then breach the surface, launching the entire vessel clear out of the water. The new fully vectored thrust system mimic the tail articulation of real aquatic animals like sharks and dolphins.

Some other high tech features that are incorporated into the two-seat vessel: A snorkel mounted video camera transmits live video to LCD screens for the pilot and passenger during dives, GPS navigation, and on board stereo with iPod docking.

Although Innespace vessels start at about $60,000 USD, the limited edition X model goes for a little over $80,000. The company plans to build just 10 of this particular model; three have already been sold.