We battled three sharks at a time in some instances, causing mayhem and lots of tangled lines and lost tackle. 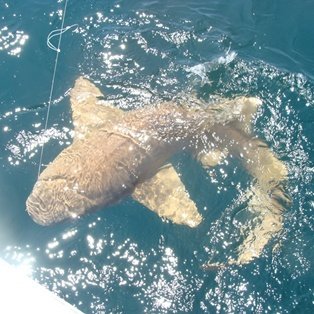 Sharks are not in short supply in the waters off Amelia Island. In a recent outing we traveled 30 miles out in an effort to avoid the Atlantic Sharp Nose shark which inhabited every reef and structure we visited. We battled three at a time in some instances, causing mayhem and lots of tangled lines and lost tackle. A six foot 200 lb nurse shark was also released after a brief, and surprisingly easy fight. This toothless fish was very docile and un-aggressive compared to its toothy cousins.

We hauled in only one legal snapper, a nice cobia, and a lone triggerfish went into the ice. Several hungry barracuda were also released after an attempt at trolling live baits. Although barracuda are not generally recommended as table fare, I must say that the smaller ones are as tasty as anything else when grilled to perfection.

Releasing smaller sharks unharmed without being bitten in the process is easy with the use of an ARC de-hooker. This is a device promoted by the famed artist Guy Harvey. They come in various lengths depending on the size fish you wish to de-hook. Essentially it is heavy wire with a handle on one end and a curly-Q on the business end. It slips over your fishing line and slides down to the hook. When the line is pulled tight the de-hooker engages the hook and the fish can be flipped off with relative ease. You don’t even need to touch the fish. This is a win-win for both the angler and the fish. Fishing gloves constructed of new Kevlar materials are great protection during any fish or bait handling chore and can even reduce the chances of knife cuts and fishhook mishaps.

If you must hold a shark to remove tackle, hooks, or lures, hold it securely behind the head and use long pliers. There’s really no need to gaff a shark, beat it or stab it to death to remove hooks. If you feel the shark is too large to safely handle, leave it in the water and simply cut your line or leader and the creature will likely survive even with a little extra hardware in its mouth. Make no mistake about it though; you cannot be too careful when handling sharks. They can twist around with lightening speed and strength and cause serious damage to whatever or whomever they latch on to. The best way to catch sharks this time of year is to fish as you normally would for almost any saltwater species and you will likely hook into a shark. Catch and release is recommended as they are becoming as scarce as red snapper.

Call me if you wish to catch any of the above mentioned species of fish.
Captain Jim Wormhoudt
Cleansweep Charters
(904) 753-0882