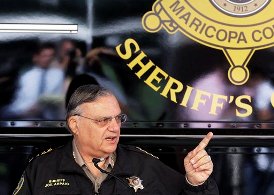 The Face of Arizona Immigration Enforcement

Since I detect an increasing promotional presence from Florida’s Republican contender for the Governor position Rick Scott, to adopt the Arizona approved state immigration law for Florida, I feel the need to follow the debate closely, mainly because Florida’s illegal immigrant problem in my opinion, is of different proportions and character than Arizona.

Yesterday was D-Day for the new Arizona Law and modern day John Wayne, Maricopa County sheriff Joe Arpaio, had a field day. The 78 year old former drug enforcer turned “sweetheart of immigration enforcement” based his Wednesday afternoon sweeps with 200 deputies on two state laws, after federal district  judge Susan Bolton (ordered no doubt by the White House) ruled on Wednesday earlier in the day that the most compromising parts of the new Arizona Law be put on hold. A legal victory for the White House but probably a political victory for republicans, in an early analysis.

Even though that in itself this temporary injunction forecasts rough weather on the horizon for Washington’s position and November elections, it was the starting sign for Arpaio in Phoenix to show what is in store for Arizona, while Washington and Phoenix battle it out in court. Many states have laws on the books to fight illegal immigration and they will continue to do so. Arizona however has a special problem and thought it was time for the federal government to develop and enforce a nationwide policy, something Washington is not willing to do, considering the potential fall-out for a nation already battling a major economic crisis.

With demonstrations around the country yesterday, the whole issue now is moving into the courtrooms of legal cock fighting, all because there are so many more issues at stake than just the Arizona – Mexico border, issue that no government, right or left leaning, has dared to address.

In Phoenix the issue yesterday focused more on Sheriff Joe Arpaio, whose vigilante approach is protected by the state laws and rejected by the federales. Executive director of the pro-immigrant Immigration Policy Center ben Johnson says: “There’s no way to deny that Arpaio and others are trying to make a name for themselves in terms of the intensity of the efforts they’re using and a lot of people are getting caught up in these efforts.”

I think it would be wise for Rick Scott to get a copy of these laws and study them, because for the time being, and that could be another 30 months, Arizona’s new immigration law will be an issue for the legal community with little consideration for the diversity of the problem and the human aspects involved. It will be a lot like starting to pull on a thread and the whole fabric comes apart.