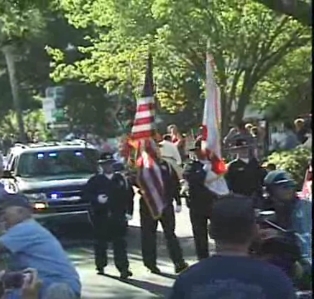 Fernandina Beach, FL – Make plans now to participate in the annual Isle of Eight Flags Shrimp Festival Pirate Parade, presented by Residence Inn, Amelia Island, to be held Thursday, April 29, 2010 at 6:00 p.m. on Centre Street in downtown Fernandina Beach on Amelia Island. The theme for the 2010 Pirate Parade is “Name That Tune”. Pick any song and change the words to a Shrimp or Pirate song. Design your unit around the theme of the song and be sure to sing and/or play the song throughout the parade route. The 8 Flags should be historically accurate. To view footage from last year’s Pirate Parade, go to www.shrimpfestival.com and click on Pirate Parade under the Activities & Schedules index.

All participants should pre-register by Friday, April 16, 2010. Parade Application packets are available online at www.shrimpfestival.com or they can be picked at the Amelia Island Convention & Visitors Bureau, 102 Centre Street (Depot), Fernandina Beach, FL. A required Safety Meeting for all registered entrants will be held on Friday, April 23, 2010 at 6 p.m. at the Residence Inn, Amelia Island, 2301 Sadler Road, Fernandina Beach.

If you have any questions, please call Shrimp Festival Pirate Parade Chairman Desiree Dinkel at (904) 261-7562, (please leave a message) or send an email to 4info@shrimpfestival.com. The 47th Annual Isle of Eight Flags Shrimp Festival, presented by Publix, will be held April 30, May 1 & 2, 2010 in historic downtown Fernandina Beach on beautiful Amelia Island, Florida. Bookmark www.shrimpfestival.com to keep up with the latest in festival information.