On Friday, April 29, 2016, the youngsters in your life can get unlimited rides at the Shrimp Festival's Kids Fun Zone with the purchase of a $20.00 wristband. 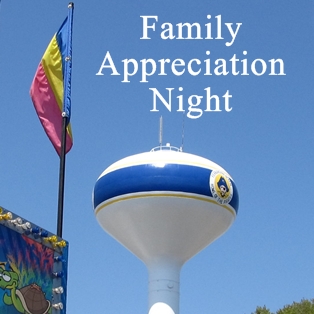 This year, the 53rd Annual Isle of Eight Flags Shrimp Festival is offering a Family Appreciation Night in the Kids’ Fun Zone. On Friday, April 29, 2016, the youngsters in your life can get unlimited rides with the purchase of a $20.00 wristband. If this sounds like too much fun, you will still be able to purchase individual ride tickets. The wristband is good from 6:00 p.m. until 10:00 p.m. and includes the following amusements: a kid sized Ferris Wheel, Wipe Out, a Stunt Jump, a Rock Wall, a Bungee Jump, Orbitron, the Giant Slide, Jurassic Adventure, Ocean Adventure, and Pony Rides.

Enjoy free, interactive shows all evening with Rick Hubbard and his Kazoobie Band, and JuggleSTUFF with Ben Mathews. Rick Hubbard has been providing positive family entertainment for over ten years and audience involvement is key to this delightful entertainer. Whether he is performing on guitar, banjo, steel drum, or another instrument, his act features, “Kids Appearing on Stage” or “KAOS” as Rick calls it. Ben Mathews JuggleSTUFF offers a unique experience for kids of all ages to take a chance and learn to juggle with cool toys. During the show Ben will break out knives, or perhaps flaming torches giving a fabulous performance while reminding us all, “Don’t try this at home.”
The expanded Kids’ Fun Zone is located at Central Park, on Atlantic Avenue in Fernandina Beach, just steps away from the historic district. Park and Ride shuttles will be available Friday evening at Fernandina Beach High School located at 435 Citrona Drive.

In addition to the rides, amusements, and shows by Rick and Ben, Saturday, April 30th the Kids’ Fun Zone also offers the Little Pirates Contest (ages six and up) and the Pirates in Training Contest (under five years) beginning at 10:00 a.m. There will be a presentation by the dancers of Bean’s School of Dance at 11:00, and at 3:30 you can “Learn to be a Pirate” with members of the Fernandina Pirates Club.

The Isle of Eight Flags Shrimp Festival will be open along the riverfront on Friday, April 29th from 6:00 p.m. to 10:00 p.m with plenty of food booths featuring wild caught shrimp. Join us for Opening Ceremonies, the Miss Shrimp Festival Pageant, the sound of Chicago Blues with Mud Morganfield and Gitlo Lee, an Invasion of the Pirates, and fireworks on Friday evening.

All of downtown Fernandina Beach becomes a festival on Saturday from 9:00 a.m. to 6:00 p.m., and on Sunday from 10:00 a.m. to 5:00 p.m., where you can peruse nearly 400 exhibitor booths lining the historic streets from Ash to Alachua Streets, and from Eighth Street to the riverfront.

At the Riverfront Stage on Saturday, there will be a beard contest, Invasion of the Pirates, an Adult Pirate contest, Musician Dominic Gaudious, and the Gin Blossoms in concert at 4:30 p.m. Sunday brings the Laying of the Wreath Ceremony, the Blessing of the Fleet, and a Shrimp Boat Parade to the riverfront. There will be an ice cream eating contest and a performance by the Party Band of the South, the Swingin’ Medallions.

There is NO admission fee to the festival, so we hope you will join us as we celebrate shrimp in Fernandina Beach, the Birthplace of the Modern Shrimping Industry.

For more details, please find us on facebook or visit ShrimpFestival.com.