Some Days I Could Challenge Tiger Woods

On a good day I can be as good as Tiger Woods' on his worst day. Lately he has days like that. 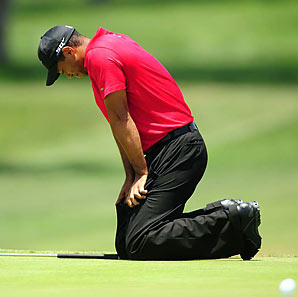 Tiger is praying for better days

Although I live on Amelia Island with a great number of championship golfcourses I am the first to admit that I am no golfer.  I have played, and I know just enough about the game to stand around the club house and nod my head in a golf conversation.  The only draw back I see with golf, for me anyway, is it takes so long to play.  I just never found myself with a half day to spare on the greens.  Oh well, maybe I do a little too much, at least that is what my wife is always saying.

Yet I was invited to play nine holes not long ago at a course in Georgia. Now please don’t ask me what possessed me to say yes, but I did.  It was really a nice morning and the company was great. We had the opportunity to talk about all kind of things that are going on in the world today and I had fun, feeling both mentally and physically exercised.  How was my game?  I will tell you this, it was the first time I had played in over ten years and I am proud to announce I had not lost my “touch”.  I was just as bad after ten years of not playing as I was when I was playing. Consistency is key and is what it’s all about, and I am consistent.

A couple of days later I was surfing the channels and happened to see Tiger Woods playing, I stopped.  I watched him miss putts, go into the woods, get mad and curse and drop his head in disgusts.  Hey, I thought, I did all those things, (and more I might add), but I knew exactly how he felt.  I saw the look in his eyes and I connected with him, right there on live television.  I thought, I think I am as good as he is.  Imagine that, I am as good as the greatest golfer in the world, and I don’t play but once every ten years.

I have heard that he has a lot on his mind lately that does not include golf.  I just want to make it clear, for the record, I only think I am as good as Tiger on his bad golf days, nothing more, nothing less. Now I can’t wait for my next round on the course.  Keep an eye for me, you can’t miss me, I’ll be the one with a propeller on my hat and a sporty pair of knickers.  I believe in dressing the part, need to look good around the club house you know.