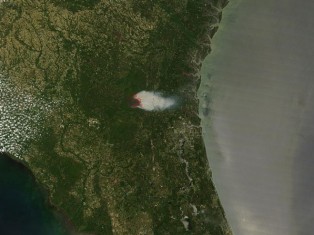 May 9 Media Release – The Honey Prairie Fire in South Georgia expanded east and west yesterday. By 6 p.m. the fire covered approximately 61,822 acres. At 8:30 p.m. the fire breeched the Swamp Edge Break in the southeast portion of the refuge near Crawford and Katie Roads about six miles northwest of St. George, GA. The spot was successfully contained by resources prepositioned in the area. The northeastern portion of the fire is approximately two miles from Chesser Island and 12 miles southwest of Folkston, GA. The westernmost flank of the fire is approximately eight miles east of Fargo, GA.

Wind in the early morning will be west at 4-5 mph. Mid-morning it will shift to the northwest at 6-11 mph, then shifting north in the afternoon with possible gusts up to 18 mph. Tomorrow, winds will be from the southeast at 3-6 mph, variable in the afternoon. There is a chance of thundershowers today and tomorrow afternoon.

Smoke should be less of a problem in Folkston today than it was on Sunday. As the wind shifts from the west to the northwest St. George and Moniac will be impacted. North winds this afternoon will move smoke to the south into Florida. Southeast winds tomorrow will move the smoke column to Fargo and to the northwest.

Motorists should be aware of the possibility of dense smoke on all roads near the east and south sides of the swamp.

There are about 170 personnel working on the fire who represent 3 Federal, 7 State and 2 private companies.

The Swamp island drive is closed to allow firefighters to install waterlines to protect the boardwalk and viewing platforms and to suppress any fire that enters the forest. Swamp Island Drive will be reopened when the threat of fire is over. As a precaution, all day use boating and boat tours from the Suwannee Canal Recreation Area at the refuge’s east entrance, are temporarily suspended.