August fishing off Amelia Island was nothing less than spectacular. King fish were reported being caught right off the beach along with excellent action at all the inshore reefs 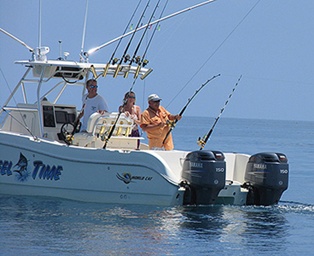 August fishing off Amelia Island was nothing less than spectacular. King fish were reported being caught right off the beach along with excellent action at all the inshore reefs. Barracuda and sharks made for non stop hook ups during most offshore trips with some sharks being estimated at well over 100 lbs.

Trolling and flat lining live menhaden have proved the best results, coupled with controlled depth fishing using a down rigger this will surely get you in the action. Offshore bottom fishing has remained good all summer long and will only improve over of the next few months with water temperatures beginning to cool down.

Snapper, grouper, sea bass and more can be found at both the inshore reefs as well as the natural bottoms well offshore. Tarpon were caught in good numbers the past few weeks and have bee seen rolling and jumping near large bait pods. These fish have also moved up in the Bells River to feed on the by-catch from the local river shrimp boats working this time of year.

Live bait is always the best choice when targeting Tarpon using either live menhaden or mullet. Try slow trolling around the tip of the south end jetties or near an actively working shrimp boat for the greatest opportunity to hook one of these silver bullets of the sea. Surf fishermen are still pulling good numbers of whiting and blue fish from the surf using fresh local dead shrimp. The south end of Amelia Island in the Nassau Sound has been a real hot spot the past few weeks but don‚Äôt forget your flounder gig as large ‚Äúdoormats‚Äù have been taken during the low tide periods.