St.Marys Lost A Claim to Fame

In search of a piece of history that could be used to boost the economy, St.Marys actually lost a claim to fame.

In 2005, our neighbour to the north in Georgia, St.Marys, received an unsuspected claim to fame when archaeological surveys done prior to the startup of construction at the Cumberland Harbour residential community revealed that the “apparent” last battle of the War of 1812 was not fought in New Orleans, as commonly believed, but in St. Marys four days after Gen. Andrew Jackson gained a major victory against British troops on Jan. 12, 1815, in New Orleans.
Well that was enough reason for some locals spearheaded by State Representative Cecile Hill to start preparing for the 200th anniversary of the battle with talks of creating an event to commemorate the war in St. Marys.

Just to get a better picture of the scale we are talking about, here is the war episode in all its glory:

The British HMS Dragon, with 74 guns, sailed from Cumberland Island to attack a battery at Point Peter, a lightly defended frontier outpost at what was then the southernmost point of the United States, with Spain kind of on and of owning Florida to the south. Outcome of the skirmish is spotty.

Another indicator of the “earth shattering importance” of St.Marys discovery, should be that the War already had ended several weeks earlier, on December 24, 1814 with the Treaty of Ghent. Yet some archeologists with a mistaken sense of drama called the battle “The Forgotten Invasion” and actually hailed the conflict between British and American troops as the last battle of the War of 1812.

It turns out they were wrong on several accounts!

A member of the Guale Historical Society and resident of St.Marys, Barry King, not only found proof that the last battle was actually fought weeks later on Feb. 8, 1815, at Fort Bowyer in Mobile, Alabama, he actually had the ‘audacity’ to publish the proof in the name of Truth in History.
King, as resident of a town in search for a reason to party, had better kept quiet about his discovery. He took away an opportunity when he claimed that he discovered the information while researching the Point Peter battle to prepare his presentation on pirates in the area two centuries ago. (I wonder if he has some surprises in store for Amelia Island’s Piracy Legacy as well)

“I just want the truth out”, he defended his ‘unpatriotic’ move as if claiming that Christoforo Colon was not really Chris Columbus and it was time to reprint history books.
John Mitchell, a National Park Service historian and curator of the Cumberland Island National Seashore Museum where many artifacts from the battle are on display, insisted that the information “doesn’t change the fact, continuing that this wouldn’t be the first time mistakes were made.”

Well hello, time to change the study books then?  Naah. It may be better to change focus and find another claim that can stand up against time for a while. According to Mitchell, the battle at Point Peter is significant because it was the site of the last occupation by British troops, he said. “St. Marys was a frontier fort,” he added. “It was right on the cusp of Spanish-held territory.”

The War of 1812, a tame affair, had no relation to Florida being Spanish

Not so much actually Mr. Mitchell, considering that Amelia Island here to your south had just temporarily introduced another flag to its claim to fame of being the Isle of Eight Flags, Spain’s influence was fading rapidly. The so-called “Patriots of Amelia Island” overthrew the Spanish and hoisted their own flag on March 17, 1812 and replaced it with the U.S. flag the next day but Spain whiningly demanded return of the island but by 1817 were out of the picture. In your defense, times were very confused in this neck of the woods

The War of 1812 was in particular between England and the provinces of British North America (Canada at a later day). Everyone involved expanded the war in 4 different theaters, none of which had anything to do with the Spanish held territory of Florida and had everything to do with England boycotting its arch enemy France in any possible way they could.

Reminiscent of George W’s stance against the world in 2002, “if you’re not with us, you’re against us”, the Brits tried to force the young USA to abandon their trade relations with France. Since the US refused to comply, the British Royal Navy blockaded our merchant fleet from doing business with the French and so, on June 18, 1812 the United States declared war on Britain. Less than a decade earlier French Emperor Napoleon Bonaparte, upon completion of the Louisiana Purchase in 1803 had already smartly stated, “This accession of territory affirms forever the power of the United States, and I have given England a maritime rival who sooner or later will humble her pride.” Devious man, that Mr. Napoleon, as he smartly had manipulated the new United States on his side against the Brits.

To follow history a little closer, this war was kind of half hearted, as the major global theater of war for most parties involved was Europe and Bonaparte’s expansionist wars.
So why would quaint and beautiful little St.Marys want to ride the coat tails of a war that was hardly a war, based on a battle that was hardly a battle, more likely a bar brawl, which was fought outside of the official ending of the war (never mind that the capture of Ft.Boyer, the so-called last battle of the War of 1812, near Mobile Alabama, took place two months after the Peace Treaty was signed.

Well, as soon as archaeologists had released the later mistaken rumor about St. Marys being the site of the last battle, State Rep. Cecily Hill, R-St. Marys, as in a typical political fashion quickly rushed to the forefront and introduced legislation in Atlanta to create a War of 1812 Bicentennial Commission to coordinate activities to commemorate the conflict.
Hill claimed the attention the town would receive would be a boon to the local economy. Georgia State legislators however decided to focus on the Civil War, after all, war is war and in Atlanta that means Sherman and Gone with the Wind. Stubbornly Hill says even today that she plans to get support for the event as the 200th anniversary of the “battle” nears. Will that be 2012, Christmas Eve 2014 or the actual date in January of 2015?

Also news of the last battle being in Alabama surprised Hill, she claimed last week, which prompts me to suggest that she needs a researcher on her staff who knows how to operate a computer, as that fact has already been recorded on Wikipedia for quite a long time. In an exact passage Wikipedia says: Once Britain defeated France in 1814, it ended the trade restrictions and impressment of American sailors, thus removing another cause of the war. The United Kingdom and the United States agreed to a peace on December 24, 1812 with the Treaty of Ghent that left the prewar boundaries intact.

Still stubborn Hill said last Friday that the battle in St. Marys should still be commemorated as a way to attract economic input. “We were a part of the War of 1812 even if we weren’t the last,” she said. “History books have never mentioned we were part of it. I feel like it’s worth celebrating.” I do admire a representative standing up for the rights and the good of his or her constituents, I really do. But please use the verified and correct arguments for doing so. Good will alone gets you easily in hot water.
When Hill said it’s just as important to ensure the city’s history is accurately portrayed, she got herself in hot water.
“If it’s not history, it’s not real,” she said. “We will have to celebrate under a different title instead of the last battle,” which in my opinion has a scent of desperation.

Start Your Own Attraction

St.Marys should develop its economic input attraction from scratch, controlled and focused. Fernandina Beach’s Shrimp Festival did not start until the mid 1960’s!
In my St.Maarten years, the island of Anguilla, just 4 miles to the west was always jealous of St.Maarten’s many festivals and attractions, from the annual Heineken Regatta to Carnival and Summerfest as it attracted tens of thousands of people. One day Anguilla figured out that if they would build a Welcome Day for anyone and everyone, call it a holiday weekend and attach some music and festivities to it, they may have an economic stimulator. That day is now called “August Monday” and attracts many thousands every year for the first weekend in August.

As to the question of truth in history, there are too many examples of the truth being bend or broken for economic gain, for the question to really matter. From Columbus to Blackbeard and Captain Kid to Anne Bonny and Mary Read, they are all “abused” in some or another community for economic gain, reliving stories they never experienced. The Island of St.Thomas went even so far that it created a pirate’s legend around BlueBeard, who apparently used the island as his marauding headquarters. BlueBeard was a fiction, but try to tell that to the millions of cruise ship passengers visiting the island. 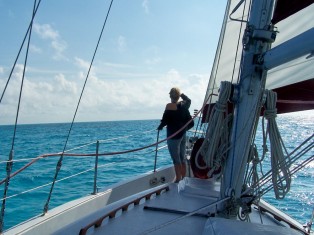 If you want truth in history I suggest you get your hands on a copy of Will Cuppy’s “The Decline and Fall of Practically Everybody” It took him 40 years of research to track the facts. You’ll be amazed at how different you will look at history and it’s a great read.

And as to St.Mary’s need for an economic generator: ever thought about a midway Sailing Race for Cruisers and Charter Yachts that go up and down the east coast twice a year from the Caribbean Islands to Chesapeake and up?
Hundreds (if not thousands) of vessels sail down the Eastern Seaboard in late November/ early December and sail back up in May to avoid hurricane season in the tropics. Just a thought.