Well to be completely fair that is what the game of Petanque is all about... approximation and fun. Rules are not something to get too hot or too cold about. 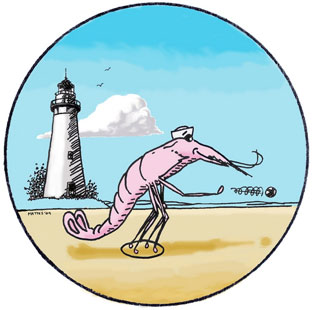 In my last update on the Amelia Island Open Petanque America tournament I misinterpreted some court size numbers. Even though there is apparently no real size requirement to the court, it needs to be big enough to be able to lob the “cochonette” an acceptable distance from the circle with enough distance width wise to have all players and the referee be able to form a circle around the balls once thrown.

A little French instruction video mentioned 15 to 20 meters long which would amount to 45 to 60 feet, with no width. Well to be completely fair that is what the game of Petanque is all about… approximation and fun. Rules are not something to get too hot or too cold about. Surface of the court? Whatever works for you. The “official” drink for a tournament is Pastis, which is why manufacturer RICARD likes to be on prominent display during a tournament.

With that in mind, the Boatyard Parking lot at the Marina in Downtown will look like the village square of a southern French town on November 14 and 15, when some 90 teams will compete for the title of this first annual event. As reported previously, players are coming from as far away as Madagascar in the Indian Ocean, including Belgian world champion Claudy Weibel and a handful of world famous celebrity chefs.

There is much more to the game than meets the eye.

Since many people watching the game seem to think that there is absolutely nothing difficult to play the game, organizer Philippe Boets of Petanque America right here on Amelia Island, gave me a video to watch last time we spoke. Based on the same titled book, “Our Year in the Provence” is the humorous relating of a story of a couple moving to this most French of all France areas. It takes the viewer from Winter and Spring to Summer and Fall in the Provence, with a good 15 minutes in the Summer section dealing with the game and the place of Petanque in southern France’s social life. And in this section it becomes clear that there is a lot more to the game than just trying to land a ‘boule’ close to the little “piggy”. Strategical and Tactical moves abound, which we will undoubtedly witness during the tournament.

Learn more every Saturday morning from 10-noon at the Waterfront courts in Downtown, when Philippe and his staff give lessons.