Summer Teen Art Workshops, which won the Best Teen Program category in the Best of Jax for Kids survey in 2009 and 2010. 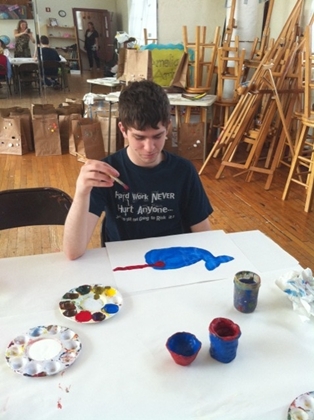 For the third year, Amelia Arts Academy has recruited a team of professional artists to solve the age-old problem, “What to do with a bored teen?” The Summer Teen Art Workshops, which won the Best Teen Program category in the Best of Jax for Kids survey in 2009 and 2010, feature week-long intensive instruction in a variety of art forms.

New to this year’s Teen Workshops are Digital Music Production and Musical Theater. During the week of July 25, students will have the opportunity to work with Frank Basile, professional percussionist and sound engineer. Students will work with Basile to learn the basics of recording and mixing instruments and vocal tracks using music software on both PC and Mac computers.

August 1 – 12 will feature Creative Dramatics, a musical theater program taught by founder of the Peck Community Ensemble, Nanette Autry. During this two-week program, students will take a retrospective trip through the 60’s and 70’s learning about the music and pop culture that defined these eras. Autry will work with students on acting, voice techniques, choreography, and costuming. Each week will culminate with a performance.

Teens at Amelia Arts Academy will also have two very different ways to learn about video production. July 5 – 9, students will have an opportunity to work with professional videographer Bill Mullis on the staff of “Fernandina Live.” Each student will produce their own segment of this funny spoof on TV talk shows.

Then, the week of July 11, students will learn to create a show in the same style as Wallace and Grommet, using stop-motion animation. Instructor Amanda Orbich will lead her production staff in all aspects of creating a Claymation Movie, from small-scale sculpture and set-building to photography and voice-over recording techniques.

Visual arts are also offered as part of this award-winning program. June 20, a beginning/intermediate level drawing and painting class is offered, followed by a more advanced workshop the week of June 27th. Photography Beyond the Lens is another of Amelia Arts Academy’s signature programs.

The week of July 18, teens will improve their photography and editing skills and learn how to create photographs without even using a camera.

For more information on these and other performing and visual arts programs, contact Amelia Arts Academy at (904)277-1225 or online at www.AmeliaArtsAcademy.org.