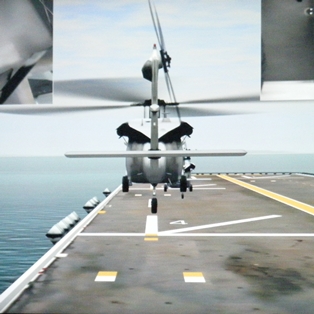 Without disclosing his rank or last name, I had the opportunity to sit down with “Jonas” of the Swedish Air Force to learn more about this helicopter flight simulator. As a helicopter gunner, the safety and cost effectiveness of the AGSS provides his officers with real time flight training under a variety of scenarios to make them more effective in their peace keeping missions.

For many of the officers this is their first experience as a helicopter gunner and the pressure is “on” when they are training inside of the simulator, an 8 X 8 box with full motion. The gunners wear specially equipped goggles and communications gear that permit them to view the inside of the chopper, and the activity outside of the helicopter in a given scenario, while in constant communication with their pilot and crew chief. From take off to landing, and feeling the wind in their face from the open door of the helicopter, all procedures that would be used in a real training mission are mimicked in the simulator. 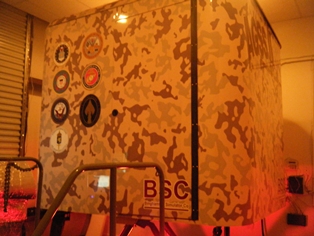 Ed Sloma, of the Binghamton Simulator Company told me the AGSS was well received when they showed off their military simulator at I/ITSEC (Interservice/Industry Training, Simulation & Education Conference), a trade show in Orlando, Florida held in the beginning of December. Government, academia and industry related contractors have been attending this show since 1966 looking for the newest innovations in training and simulation, and this year they found it from BSC.

The Swedish Air Force uses the simulator to safely and efficiently train their helicopter gunners. This hands-on approach helps establish an officer’s natural instincts, and reduce stress levels when called upon for combat. The program can also be set up to receive enemy fire for total adrenaline effectiveness. “Crew coordination is a great achievement of the simulator”, Jonas said. “Better training makes it safer”. This tactical evaluation of his officers helps prepare them for their upcoming United Nations deployment to Afghanistan. “The world is too small not to care”. Jonas added. By the second day of training with the simulator, their subconscious has absorbed the situation and their confidence sky rockets. The officers even duck when they see a round of enemy fire coming at them. The accuracy of the simulator went through ballistic testing in a wind tunnel for precision at Aberdeen Proving Ground and this data has been verified by armed forces personnel.

Transportable in a semi truck, this is an extremely cost effective way to train members of the armed forces from around the world. Yulee is a perfect location for training with its proximity to Mayport, Kingsland and Cecil Field.

The return on investment using the simulator saves the Swedish Government a tremendous amount of money. To use real helicopters, pilots, fuel and ammunition, then factor in the calculated risks associated with real training missions, the cost would be almost 18 times as much money as it is costing armed forces from around the globe to use the simulator; not to mention this is an environmentally sound option as opposed to firing live rounds into the ocean.

The Swedish military will be eliminating their conscription for 18 year old boys in the spring of 2010 and will go to a volunteer system within their armed forces. Jonas has seen about 96% of the Swedish Armed Forces Disappear in his stable region of the world. He believes the armed forces will be more effective with officers who choose the military as a career.

Before leaving the Second Amendment Gun Range and Training Center I asked if the public could walk in and pay to play on the AGSS. Sorry viewers, but the answer was a very firm, “No”.