The 10 Costliest Hurricanes to Hit the U.S.

Even though statistically our chance on Amelia Island to get hit directly is virtually zero, nature does have its quirks. Preparing is always good. 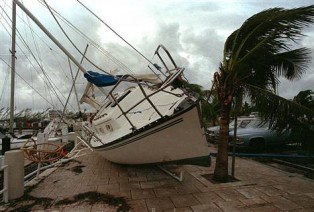 One of many ways Nature gets revenge

With the height of the Hurricane Season staring us in the face and 3 storms brewing in the Atlantic (Earl, Fiona and Gaston), it should be just a reminder to check your insurance policies (if you were lucky enough to get coverage) and make some intense preparations.

These are the ten costliest hurricanes that made US landfall so far as measured by cost (all figures are in inflation adjusted dollars).

1. Hurricane Katrina August 2005
Louisiana and Mississippi
The most destructive hurricane in US History caused an estimated $200 billion in damage.

4. Hurricane Ivan
September 16 – 24, 2004
It killed the Southern Caribbean Island of Grenanda and then hit the Southeastern United States.
Hurricane Ivan hit Gulf Shores, Alabama on September 16, producing more than 100 tornados and flooding across the American southeast. The remnants of the storm hit the Delmarva Peninsula on the 18th, where it picked up speed, passed back down the coast, became a tropical storm again in the Gulf and then hit Louisiana as a tropical depression. Ivan left $14.2 billion in damage in its wake.

6. Hurricane Agnes
June 19 – 25, 1972
South and North Eastern United States
Although a Category 1, and at other times not even a hurricane at all, Agnes carved an $11.2 billion path of destruction from the Florida Panhandle to New York, New York. Most of the damage came from heavy rains.

7. Hurricane Betsy
September 7 – 9, 1965
Southeast Florida, Southeast Louisiana
Falling just short of being classified as a Category 5, Betsy struck the Florida Keys on the 7th, and New Orleans on the 9th. Flooding from the storm breached the levees in New Orleans, leaving the city flooded for ten days. Betsy is also called “Billion Dollar Betsy” because it was the first to cause a billion dollars in damage. In today’s dollars, the total would be $10.79 billion.

8. Hurricane Frances
September 5, 2004
Florida
Frances was a Category 2 that caused $8.9 billion in damage primarily as a result of rain and flooding in heavy populated areas.

Camille, a Category 5, was the second most intense Hurricane ever to hit the United States. The final windspeed will never be known because all measuring devices were destroyed. Storm tides, winds, and flash flooding caused by the storm on its track to West Virginia and Virginia caused $8.8 billion in damages.

Diane, along with her sister storm, Connie, which hit the same areas just five days earlier, caused $6.9 billion in damage. Most of the damage was caused by flooding.

Allow me the observation of the following hypothetical scenario.
My house carries a mortgage of $500,000; it is insured for this amount against storm and flooding.(Mortgage requirement). The recent economic downturn has caused the appraised value to be lowered to $300,000. A hurricane renders my property a total loss. Is that loss calculated at $300,000 or $500,000? Does my mortgage company get $300,000 pay out and do I still owe them $200,000 because the insurance adjuster signs off on replacement value and not the insured value?
You think about it. I have been there on several occasions in my life. I know who gets the short end of the stick. How about you?