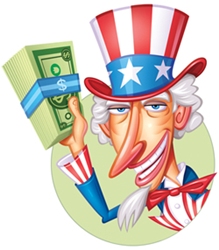 Just a thought, but the President addressed the Nation on national TV using terms such as, “long and painful recession”, “crisis” and “edge of collapse”. Now as I see it, one could say perhaps this was the old scare tactic routine, hoping everyone would jump behind the bill, call their representatives and get this thing passed. I don’t know about you, but I get the feeling of being in a car dealership.  This is the last one we have, better get it now, there are two other buyers looking at it, that kind of feeling.

The plan sent to Congress, as reported by the top news agencies, consisted of two pages. I had a friend who sign an interest only loan a couple of years ago, for only $100 thousand dollars, as bad as it turned out to be, it consisted of more than two pages:

When we look at the debt now hanging over our (taxpayers) heads, you find yourself looking for something to take for a headache. The existing public debt alone figures out to be US$31,600 for every man, woman and child in America. This new demand, if passed and stays at the $700 billion figure, will add another estimated US$2,300 for every American.

The new US$700 billion (by the way, this is a dreamed up number, not the real figure) will supposedly buy up all the toxic debt off the books. As usual, it’s coming out of the taxpayer’s pockets. Market leaders have been holding their breaths this past week, hoping that this “windfall” relief package will be approved, money will start to flow and life will be good again, or will it???

I know the administration is behind this but I still ask is it worth it? Will it really do the job? Who are the individuals who will profit from it at the end of the day? The estimate I have seen to really clear the books of bad debts, (banks) is over US$3 Trillion. Now the big question; If it is going to take over $3 Trillion to clear what we have now, how much more will be added to the “toxic” debt number in the next year? And we should all think a mere $700 billion will do the trick. What would really happen if nothing was done???????

The bickering continues on Capital Hill this weekend. Lawmakers are hard at it, each side trying to get their plan passed. In some cases their plan may include pet projects that they all seem to have, at any one given time. The past ten days have been a roller coaster ride to say the least. The nation and the rest of the world are waiting to see just how this is going to turn out. Will there be a plan or not? What if there is not plan? What if nothing is done? Where does that leave us, the taxpayer?