The Age of Improv Monetary Experimentation

Bernanke passed the torch to Yellen and monetary policy continues to favor Wall Street as the economy is stuck in a Japan-like deleveraging process. 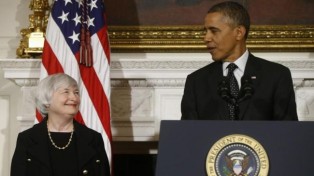 And absolutely nothing will change preventing the dollar's deterioration

The torch has passed and Janet Yellen has taken off where Ben Bernanke left off. She calls herself a sensible central banker, but reserves the right to ignore sensibility, transparency rules and economic formulas in favor of improvisational monetary experimentation.

As a consequence of her debut appearance on Capitol Hill earlier this week, Congress voted to raise the debt ceiling…until next year…without quibbles or conditions.

And frankly why would they quibble or protest. They have little to no knowledge of economic or monetary policy and have only experienced since 2008, that slow deleveraging of a huge bubble can be manipulated without chaos and blood in the streets.

In order to do that Washington and Wall Street had to circle the wagons and create an insider vacuum that exorcised transparency, equality and accountability. The financial system almost collapsed but none of the perpetrators was ever sent to do time in federal penitentiary. Au contraire, they were allowed to pay themselves huge bonuses for circling the wagons and kicking morality to the curb.

As the Fed fuels “excess funding” of America’s credit needs… this excess funding drives the stock market beyond any real market value.

The Fed source of funding is like manna from heaven to the 1%. No calloused hands earned it. No drop of sweat stains it. No furrowed brow figured out how to make it. Just turn on the printing presses.

Five years ago, we were certain the Fed could not expand its balance sheet to $4 trillion without grave and ghastly consequences. But month after month goes by with no such consequences showing up on the horizon as we are searching for a sign that show at least the top of their masts. So what are we to think?

The global financial crisis introduced an politician’s nightmare as it required deleveraging by paying down, defaulting on, writing down and writing off debts. This would be long and hard, we reckoned. And when that task was done, we would run into a period of inflation, maybe even hyperinflation depending on how monetary policy would be executed.

Responsible scenario: with deleveraging completed, people will begin to borrow and spend again. The Feds would facilitate this by increasing the money supply – possibly virulently, with ultra-low interest rates – and drive up consumer prices.
Irresponsible scenario: desperate and impatient to revive the go-go days before the crisis began, the Fed might resort to direct monetary stimulus (Helicopter Ben anyone?).

The US, and many Federal Bankers around the world, decided to keep on partying like it’s 1999 and simply change the formulas to reflect growth and give the appearance that we’re on a slow turn to financial normalcy, rather than living high on the hog as if ‘apres nous le deluge’ was monopolized by the French revolution, never to be repeated again.

Janet Yellen stated clearly on Capitol Hill that she would continue making policy up as she goes along, centering her efforts around the official unemployment numbers. Never mind that the Bureau of Labor Statistics in its current 6.7% unemployment estimate has eliminated almost 17% of the American workforce.

The key to understanding unemployment rates is the Labor Force Participation Rate—meaning the percentage of the population that’s officially employed. When the BLS calculates the unemployment rate, it doesn’t consider a person whose unemployment benefits have run out and is no longer looking for a job to be unemployed. With no jobs available many workers go into the black market as handymen, seasonal workers off the books etc. etc.

Current policy means if everyone quit looking for a job, the unemployment rate would be zero? The large drop in the number of unemployed mostly reflects people that have becoming ‘discouraged’ and are being statistically removed from the headline labor force, instead of finding jobs and returning to work.

Previously 6.5% unemployment was the Fed’s benchmark for raising interest rates and tapering off financial stimulus. That position is now retracted and Quantitative Easing can go on and will probably become a major Fed instrument from here on, to avoid a necessary currency collapse in the threat of social chaos.

And since we’re all still more or less and alive and struggling forward since the 2008 almost collapse there is something to be said for this approach. BUT ONLY if cautious action is taken to repair the economy and avoid uncontrolled excess for the future. But in the words of John Popper, we should all be aware: “There is a price to pay”, when the Feds announce that the age of Improv monetary experimentation has arrived.