The Beach was Empty this Morning

It was a good summer with lots of familiar faces and festivities and some great new ones. 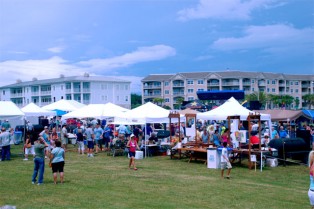 Yesterday morning, Labor Day, there were at least 500 people walking the beach at 7am, with a good amount of vehicles parked near Sliders in the distance.
This morning? I met a total of 3 women and 2 guys jogging in my 45 minute walk and one lonely vehicle, probably left there from a party last night.

The Summer Tourist season 2010 is drawing to a close and we can only hope that businesses on the island that depend on visitors did well enough to sustain themselves until the next season comes along, or at least until some of the exposure that Amelia Island has been getting lately can be exchanged into a longer season with yet  more quality visits.
In recent time the island has become a staple of recommendation in Condé Nast Traveler, received accolades in the September issue of Coastal Living, got a great write-up earlier this year in the New York Times and is a feature destination in October’s Marine Life Magazine, besides numerous mentions and  industry awards.

With a little help from our friends

A famous hurricane expression amplifies that “there is no storm that blows evil for everyone”.  Amelia Island has been ready for the “big” exposure for years, yet it took this year’s unfortunate oil leak disaster in the Gulf in early spring, to give us that a special push to awareness. Many vacations planned for the Louisiana Wetlands, Mississippi’s Biloxi and Gulfport beaches and the Florida Panhandle were redirected in favor of the Florida Atlantic coast and Amelia Island and Fernandina Beach got its fair share of that traffic.
The advantage of the island as a vacation destination is that it does not need any preparation. No matter how when or what, all the ingredients for a fabulous vacation are always in place, aided by the fact that the weather is usually magnificent. The beaches are long, wide and clean, the resort hotels, B & B’s and Inns offer a product and price range for everyone and Historic Fernandina Beach is a great location when the beach and sun have taken their “toll”.

This year we also noticed that initiative from various charities, companies and individuals expanded the entertainment offerings.
We enjoyed the usual first Friday in the month Sounds on Centre in town, which now between June and Sept. was followed by Sunsplash on the Beach at Seaside Park. Organized by Pipeline Surfshop and Jeff Barksdale’s Big O Events productions, Sunsplash brought everything for a day on the beach: kids activities, surfing, volleyball, fashion and bikini shows and lots of good music.
There was another remarkable first this summer when the Convention and Visitor Bureau attracted the Southern Tailgate BBQ Cook Off for two days of food and fun on Main Beach which attracted thousands of visitors over the last weekend in August.
Actually there were so many events prepared and held this summer, that a short break would seem like a welcome reprieve for many of the organizers.

But that’s not how it works on this island.
Now the “niche” organizations are getting ready to push their events, fundraisers and festivities, from the world famous Ritz Carlton organizing “The Flavor of Salt Tour” which highlights the Cuisine and Wines of the Iberian Peninsula (Spain and Portugal and the Balearic Islands) on its Sept. 16 rendition, to Tennis at the Amelia Island Plantation. In October we welcome the Amelia Cruizers and their signature 8-Flags Car Show in Downtown on October 16, followed by The Rotary Club of Amelia-Sunrise new initiative called Ameia Challenge on October 23 and a week later the island will be busting with Florida-Georgia Football “fanatics”.

On November 12 we will see the start of the 2nd Pétanque America International Open Tournament with once again players from around the globe checking in, while at the same time Amelia Island Plantation will be the host spot for a 9 day USTA $10,000 Futures Tennis Tournament.

Just check out the calendars on SearchAmelia and we will try to keep you updated on major and minor events that will keep attracting visitors to our beautiful island, whether for a day, a weekend or longer.