The Day the Music Died

It was February 3, when a plane crash claimed the lives of Buddy Holly, Ritchie Valens, the "Big Bopper" and their pilot, Roger Peterson, forever known as The Day the Music Died. 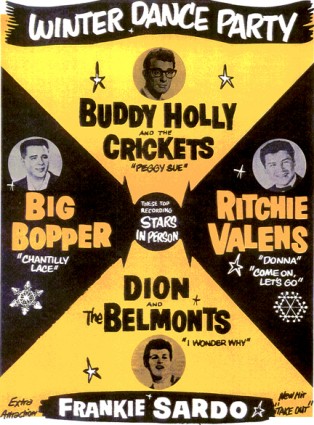 The Day the Music Died

It was just after 1:00 AM on February 3, 1959, when a plane crash claimed the lives of Buddy Holly, Ritchie Valens, the “Big Bopper” and their pilot, Roger Peterson, symbolized forever in Don McLean’s legendary song, American Pie; with the line… “The Day the Music Died”.

Even though it has been over 50 years, the event is remembered as a pivital moment in rock-n-roll history and tourist still flock the small town about 100 miles from Des Moines, Iowa, where the plane went down.

Buddy Holly, born Charles Holley on September 7, 1936, had a short career of only a year and a half, but this songwriter and singer was charting new territory in the landscape of American music.

Just 17 years old, Ritchie Valens (Richard Steven Valenzuela; May 13, 1941 – February 3, 1959) was opening the scene for the Latin rock movement. His most popular hit, “La Bamba” was a Mexican folk song that Valens transformed into an American hit!

The Big Bopper, Jiles Perry Richardson, Jr., the oldest of the three rock stars killed in this plane crash was born on October 24, 1930. The Big Bopper had been a disc jockey whose personality and big voice made him a rock and roll star. “Chantilly Lace” was his most popular song.

The pilot of the ill fated plane was Roger Arthur Peterson, he was just 21 years old but had received his private pilot’s certificate in 1954 and was hired as a pilot. His flight was to take the musicians from Iowa to Fargo, North Dakota for the Winter Dance Party. It was a dark snowy night and the plane never made it out of Iowa.

February 3rd will always be regarded as the Day the Music Died to rock and roll fans around the world!