The Decline and Fall of Practically Everybody

The life of 103 historic celebrities coming together in one painting to portray the vanity of celebrity. A historical landmark. 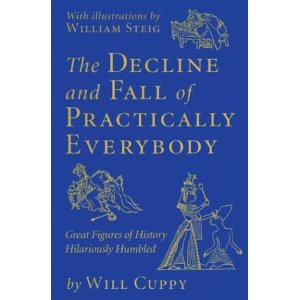 A Humbling View of the People that Made History

Our resident Internet Scout Rick Traum came up with another jewel he found on line to share with us. His latest discovery is this 2006 painted canvas in the style of Sgt. Pepper Lonely Hearts Club Band by 3 Chinese Painters, that is now digitized with the life stories of 103 historical and contemporary celebrities, some of mankind’s defining landmarks such as the Pyramids and Stonehenge, important book and cultural references and even lolkat (“Im riding in a kamel pockits”) and the Ford T model.

This painting tough truly remarkable in its execution, is even more interesting by its associations. You will find Chairman Mao, enslaver of all the Chinese people sit beside Abe Lincoln who abolished slavery in America. Dr. Jack Kevorkian shares a table with Sigmund Freud; Marilyn Monroe is surrounded by Arafat, Brando, Fidel, Lao Tzu, Goethe and Che Guavara, but none of these guys have eyes for her. Actually she is kind of hidden behind a camel’s ass, while the camel has a humorist link to a series of people who became celebrities in spite of looking like a camel.

Another more disturbing discovery is the way Robert Oppenheimer, father of the Atom Bomb, looks at Elvis the King and how Stalin has Leonardo da Vinci’s attention. George Bush junior is depicted famously off track with pointing his spyglass in the opposite direction of where Osama bin Laden is looking at a procession of 72 Virgin behind George’s back. In 2006 their history and fall from the front pages of World News had not been written yet.
As a matter of fact this painting immediately reminded me of Will Cuppy’s 1949 novel “The Decline and Fall of Practically Everybody”, a book that should be in everyone’s library.

The Painting was created by 3 Taiwanese painters, whom painted themselves into the corner of this illustrious dinner party, watching from the top of the Great Wall of China with Durante degli Alighieri – Dante reading from his famous works. It is titled “Discussing The Divine Comedy With Dante”, another book that should be in your library, and seems to be a metaphor for today’s celebrity-obsessed world.

When you click on the link , a big version of the computerized painting appears. Run your cursor over the people.
The program tells you who they are – every single one of them.
Now click on a person and you obtain the individual’s life history. Fascinating… and it can keep you busy for hours! If I would home school my children, I’d have a great tool to keep them interested in learning.
But for you who need your daily shot of tabloid celebrities, don’t bother trying to find Paris Hilton or the Decline and Fall of the Kardashians; they didn’t make the cut.

Here is the list in case you can’t find one. Enjoy!

Publisher’s Note: Sorry for the fact that Sarah Palin’s face keeps coming up on the Painting Page, endorsing Newt Gingrich. Definitely a distraction from another “celebrity” who thankfully did not make the cut and another one who hopefully never will.