The Decline of The U.S. Dollar Brand 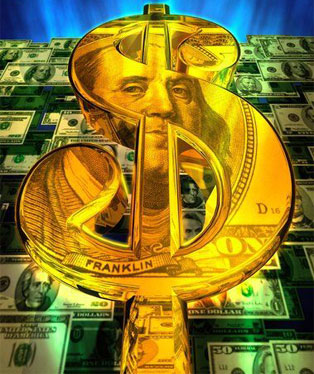 The US dollar is a sort of monetary or currency brand, and like any other brand, it can fall out of favor. Even iconic brands can lose their ‚Äòmust-have‚Äô standing. Remember the Members Only jackets from the 1980s?‚Äù

So it is with the U.S. dollar, a brand making lows in the financial markets. It is a brand past its apex and a replacement waits in the wings. This line of thought comes from James Grant, who presented the idea of the dollar as a flagging brand at Grant‚Äôs Fall Investment Conference in Manhattan.

Grant dug up the example of the Deutsche Mark, or DM. ‚ÄúThe DM was a hallowed monetary brand, a source of stability and a symbol of Teutonic fiscal restraint. As recently as the end of 1991, the DM made up 18% of world currency reserves. It was the quintessential strong currency.” At that point, according to historian David Marsh, the DM held sway ‚Äòacross a larger area of Europe than any other German Reich in history. Today, the DM does not exist. Look at the status of the once Almighty British Pound. Not even a glimmer of its former power and influence.

Tuesday‚Äôs sudden loss of confidence in the U.S. dollar sparked a fire in about every other asset class. Gold was the most notable, soaring to a new record high of $1,043 an ounce — though you‚Äôd be hard-pressed to find an ounce of gold anywhere that cheap. The spot price climbed up to just below $1,050 early Wednesday morning.

Silver‚Äôs been off to the races this week too. Up a buck since Monday, the spot price is at about $17.40 today. In percentage terms, that‚Äôs about 6%, actually outperforming gold‚Äôs 4% rise this week. In addition the gold-to-silver ratio remains around 60, the same level as last month. Silver looked like a bargain then, and still $4 bucks below its credit crisis high, it still does today.

‚ÄúThe ‚Äòpoor man‚Äôs gold‚Äô has come under fire in recent years that it just doesn‚Äôt deserve ‚Äòprecious metal‚Äô status. 50% of the metal that‚Äôs mined every year goes into industrial uses, which leads many to think it should be considered a base metal. This week‚Äôs $1 pop absolutely shows it as a dollar hedge. I recommend that you hedge your dollar holdings with silver at your earliest convenience. The dollar‚Äôs ruling days are numbered.