The Economy is Floating in a Pool of Confusion

While only weeks ago insiders pronounced the luxury resort market dead, new voices claim a magical rebound in occupancy and room rates 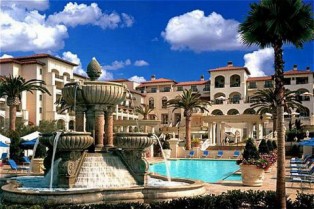 St. Regis was pushed into Bankruptcy by AIG's arrogance

Every columnist with a regular publishing outlet has a pool of potential stories to research and write about and I’m no exception.

In today’s digital tickle file I had a story in preparation on the decline of luxury resorts, initiated several weeks back when I read about the demise of the Ritz Carlton Lake Las Vegas and I vividly remember Ritz’s spokesperson Vivian Deuschl saying: “It’s nothing the hotel did. It’s a simple lack of business and a decline in the tourism industry.”   The hotel that boasts of its retail boutiques, gondola rides and wedding chapel suffered a backlash from the so-called ‘AIG effect, referring to the upheaval caused by American Insurance Group’s brazenly arrogant decision to fly top brokers and executives to a luxury resort soon after receiving an $85 billion bailout check from the US taxpayers. As a fall out consequence the Lake Las Vegas Ritz is slated to close on May 2nd.

Than less than 2 weeks ago I received a depressing story about Caribbean Luxury boutique hotels never to open again and the “fear” that $1,000 room rates a night will be a thing of the past. Well having spent more than 2 decades in the Caribbean Islands with very frequent visits to opulent luxury on the islands of St. Barth and Anguilla and occasional visits to mega luxury on Richard Branson’s Necker Island in the British Virgins, I knew that this Travel Weekly story completely ignored human behavior.

The Magic of Lent?

So with a rather sober look at luxury travel I was getting ready to write the story when this morning I open my inbox and guess what, here is Simon Cooper, president of Ritz Carlton Hotels exclaiming that luxury is coming back quicker than the rest of the hotel segments and that rates are going to start moving up (already). The story is followed by numbers, statistics and quotes from executives in the luxury brands such as St.Regis and the Phoenician, stating that demand is back up for luxury and Starwood’s flagship property, the St.Regis in New York sees demands back up to levels last seen in December 2007! Did that peek my interest. I betcha.

So what’s going on? Shift of Focus?

Are we in a recovery…is the worst behind us and are we looking at fair winds and smooth sailing from here on?
Well like in any of these hopeful stories of optimism and godspeed, the warning is in the tail end when Ritz’s President Cooper becomes more realistic:”Things are starting to pick up, but it’s certainly going to be a long, protracted valley.”

He should have added to that statement “Here in the US”, as Ritz Carlton and other top brands are aggressively pursuing opportunities in the hotel building boom that began in Asia and the Middle East before the bust. “China is very hot”, says Cooper, “and despite its ups and downs, the Middle East clientele continues to spend money looking for great locations,” adding that the conversion of the Nile Hilton in Cairo to a Ritz-Carlton will take two years.

So what did really happen to the Luxury Resort Segment in recent years?

1. When the economic bubble went bust, luxury travel took a hit, just like any travel spending, but the AIG effect really took the market to the cleaner’s. Cancellations across the nation were the instant backlash, resulting in bankruptcies and foreclosures of well positioned luxury properties such as the Fontainebleau in Las Vegas, Gansevoort in Miami Beach, W Hotels in San Diego, the Ritz in Lake Las Vegas as within days and weeks of AIG’s abberation these hotels experienced double-digit drops in occupancy, setting off fire sales on rates that most experts agree will take the hotels years to recover from. The foreclosure of the St. Regis Monarch Beach in Laguna Niguel, the hotel that hosted the now infamous meeting by AIG just after the company received billions of dollars in a federal bailout funds, sums up best what happened. Ostentatious behavior was out of vogue for a while.

2. Secondly there were a lot of luxury resorts that were developed in tandem with condo-hotels, which in the bubble days was the preferred way of financing luxury projects for developers. When it all crashed and credit crunched, these condo hotels pulled down some of the luxury resorts they were attached to, as was the case with for example Gansevoort South Beach.

3. It has been said before that there HAS TO BE a recovery effect when the Government puts a couple of Trillion Dollars into restarting the economy. Well we’re right at the predicted point in time when this was supposed to happen – Spring 2010. Even the travel industry’s top dog economist, Dr. Bernard Baumohl stated a couple of weeks ago that April would be the turning point for employment growth. The potential problem is that only time will tell if those trillions ended up in the engines of the economy or are evaporating as spillage while pushing up inflation.

4. The media keep focusing on the fact that Wall Street is doing a crazy bull rally over the past 12 months, so everything has to be back on the up and up. But what they don’t tell you however is that the VOLUME of trading on Wall Street is less than 40% of what is called NORMAL. So yes, there are still a substantial number of people with money out there and they are getting restless as their lifestyles of opulence and gambling have been subdued for way too long, as they feel it.

Luxury Travel is a Niche Market not an Economic Indicator

No surprise also that the occupancy numbers in luxury resorts are going up, no surprise either if rates will go up soon. There are only 442 luxury projects GLOBALLY in the pipeline of this niche market of the super wealthy, of which 276 in Asia and the Middle East. The same as with Wall Street, only the super rich are playing, because they are bored sitting around.
There are still some 800 known billionaires in the world and in the US alone 2009 registered 7.8 million millionaires. As an example in Belgium, a small country of 10 million, 1 out of every 7 families are millionaires.
Here at home it also means that even if unemployment would be 15%,  85% still would bring home a paycheck and a number of those bring home a hefty paycheck.

The economy is binary

Our economy is binary, or at least used to be when it was based on the philosophy of Capitalism. In general macro economic terms that means if total supply meets total demand, life is in the balance. The meltdown of 2008 happened because the pendulum had swung too far out of balance, which was allowed by a system that allowed pipe dreams without making allowances to pay the piper. In that economic climate the “weakest” players get eliminated. Now mind you, that doesn’t mean that these players were not good business people. Their industry may have just experienced the perfect lay out for the perfect storm and like Ritz Carlton’s spokes person said about the closing of its Lake Las Vegas property: “It’s nothing the hotel did or didn’t do”.

I’ll be much more optimistic about short term real recovery if Ritz Carlton decides to keep its property in Lake Las Vegas open on May 2nd and parent company Marriott decides to keep the Sawgrass Marriott open, but I don’t hold my breath as industry insiders point out that some 30% of hotel loans could default by 2012.  Unlikely however, since banks don’t want those assets because if they take them over, they not only pay for operating losses but they also have to pay all the capital expenditures. Instead they will keep most of them on their balance sheet as assets of questionable value.

Economic confusion will continue a while longer and we will not know for some time if government stimulus and bailout restarted the engine or just kicked the can of misery down the road; it’s just that the well heeled ones are getting restless and that the media interpret that as the beginning of the rebound.

As I said before, the economy will not really recover until people have confidence that their jobs are safe, more jobs are being created and there is a realistic expectation of salary increase for the future.