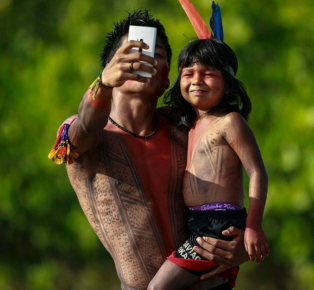 Unstoppable Technology: A ‘selfie” in the Amazon

Okay I admit, I’m coming a bit late to the House of Cards Cable TV series, even though Kevin Spacey is honestly one of my favorite actors of all time. Spacey’s character Frank Underwood is apparently already president in the current season, but in my episodes he is still the political dog from the State of South Carolina with a far-reaching foresight, ready to manipulate everyone for his objectives.
In any case, I bought the first season from “On Demand” last week to make my hour before bedtime more enjoyable since regular network TV stinks badly in the summertime.

Last night I watched the episode in which some well intentioned loser Congressman from Pennsylvania with an addictive personality, was manipulated into pushing the closure of a shipyard with a loss of 12,000 jobs. Watching the chaos, animosity and human desperation unfold, essentially as a result of ignorance, I pondered about unions, income inequality, decent wages and the plight of the fast food workers who staged protests in more than 100 cities across the nation last week, demanding a wage hike to a minimum wage of $15 per hour.

And yes I used the word “IGNORANCE” deliberately.

It is not my intention to belittle people, but I suggest that we collectively grow up and face the future as it is going to be, not the way it used to be in “Forevermore”. Saving menial jobs for unskilled laborers is a deadend street. It’s Zombie land in my opinion and it goes to show that even the president of the United States doesn’t understand why America’s economy is structurally flawed these days, despite the so-called recovery. At a Labor Day rally in Milwaukee, Mr. President said that if he had a service-sector job and “wanted an honest day’s pay for an honest day’s work, I’d join a union.” That is sad and the man needs to be replaced by President Frank Underwood.

Why? Gas station attendants have died out over the past 35 years, except in some unionized regions or areas catering to the super rich.
While typists in large company type pools, switchboard and telephone operators have already completely vanished, librarians, inventory controllers, train conductors, airport ticket counter workers, cashier-checkouts at department stores, letter carriers, toll collectors, book keepers, accountants, factory workers and bank tellers are just a few of the jobs on the chopping block in years to come. I could probably list another 500 professions that once put food on the table for someone and his or her family, but are now slated to become obsolete in the next ten years. Fact is that it’s not outsourcing that is creating massive unemployment; it’s advancing technology.

We talked about it 50 years ago, but few really believed it was going to happen in our lifetimes. Well here is the news for all those spinning in menial jobs that can be replaced by robots: the humanoids are here.
If a country like mainland China with a population of 1.5 billion people, many of whom earn less than $2 an hour, is starting to utilize robots in service sectors like food, manufacturing and hospitality, because it can be done cheaper, than we have to accept that $15 per hour minimum wage for a burger flipper here in the US has no future.

More robots are replacing humans in the service sector around the globe.

A restaurant in China is using more than a dozen robots to cook and deliver food, while the noodle robot can make twice as many noodles as a human chef and costs less than half the human chef.

In Russia, the pizza drone is completing unmanned pizza deliveries. In Madrid Spain self-service machines operate at a McDonald’s,   and in the U.S., Momentum Machines announced that it has created a robot that can produce roughly 360 hamburgers in an hour.  That’s a hamburger every 10 seconds!  What’s more, the robot can slice the toppings just before serving it, creating an incredibly fresh sandwich. It will even drop your burger in a bag when it’s done preparing it, so it’s immediately ready for the customer.

Want a “custom meat grind”? Momentum Machines reports that the next generation will offer custom patties.  How about a burger that’s 1/3 beef and 2/3 bison?  The robot will be able to do that, too.

The robot isn’t enormous either. It takes up only 24 square feet — that’s smaller than the majority of assembly-line fast-food operations. Also the robot is more sanitary and consistent; they don’t need to go to the restroom or step outside for a cigarette break. These robots don’t require health insurance or a career plan. They don’t get sick, need to leave early to pick-up kids or take a vacation.

Raising wages significantly will have a ripple effect that will impact everyone and not for the better.  Prices will rise for all the goods we buy as owners cover the costs of those higher wages. And one of the quickest and potentially easiest ways for restaurant owners to save money will be to make a one-time payment (plus maintenance) to bring in a robot.

In the near future, many workers will be squeezed out of a paycheck. Unless those laid off can rely on or learn another set of skills, unemployment will increase across the country, leaving more Americans dependent on a deeply indebted government … which will only become more desperate to snatch up funds from wherever it can find money.

Attempting to artificially raise wages is never a good thing, because there’s always someone waiting to do the same job cheaper.  And this time, that someone just happens to be a robot.

We need leaders that can think and envision beyond the length of their nose and propose programs that have feasibility 20, 30 and 50 years from now. The era of competing with robots for jobs has arrived.