The Evil Twins Resistance and Procrastination

The Wordpress Website Building Bootcamp is scheduled for Jan 17-21. You're guaranteed to walk out with an internet business. 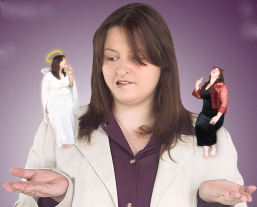 Two of the biggest enemies in life are the twins Procrastination and Resistance.  Every personal idea and desire that comes around in our lives, will first find these Twins in its path.

Are you being confronted with great opportunities, like a great job offer in another country or another state? The chance to finally build and own your own company? The chance to travel where you’ve always wanted to go, or an invitation to become partner with someone you deeply admire?  Procrastination, the firstborn twin, will initially try to postpone your action, while Resistance, the younger of the two, will throw everything but the kitchen sink at you to stop you from doing what you want. Resistance may come in the form of parents, friends, neighbors, congregation, bank tellers, supermarket cashiers, mailman, sport club members or anyone else who thinks that they should have a legitimate impact on your decision-making process, by the virtue of the minimal social relationship they have with you, of course.

Procrastination will manifest himself – yes he is decidedly male – on a very personal level. First he’ll drop hints and whisper that it’s really not necessary to take action right this second, that tomorrow or even next week would be fine. Procrastination is essentially a villain, behind the scenes, the escalating factor behind every major problem in your life. He sways you to ignore initially-small issues, ones that could have been taken care of with a quick phone call or note, and is the culprit behind the unfolding massive drama by avoiding action.

Procrastination, however persuasive, knows though that he is the weaker one of the two. His twin sister, Resistance, is much more persistent in her evil nature as she follows us in every footstep of our lives.

As a side note, I have written about this issue many times using different metaphors and expressions, like “When My Ship Comes In” and “The Road to Hell is Paved with Good Intentions.” (If you’re interested in reading critical issues explained via metaphor, try A Hole is Just a Hole or Beware of Financial Mine Fields).  Never forget, that evil twin, Resistance, will not hesitate to squarely put your spouse and children against you, making you feel like an egotistical jerk without a social conscience or care in the world. She is the Chair woman of The Committee of Jerks in my Head.

I know because I’ve fought Resistance many times in my life. In the beginning, victory was hers quite often, but as I got older – and wiser, have you – I became more persistent and recognized the pattern of her attempts to seduce, or even force me against my wishes.

I recognized that she didn’t hesitate to recruit even those closest to me and my happiness, and especially turn them against me in matters of prosperity and financial independence, undisputed cornerstones for a fulfilling and happy life.

Sure, during the course of a long life, authority tried to silence me, the religious rebuked me, leaders and teachers have attempted to sabotage me, my own heart turned against me on many an occasion, my birth family sought to hold me back when I decided to leave a blisteringly prosperous corporate career for an uncertain future across the Atlantic in the Americas and, on the occasions when Resistance won, my own mind would always be able to find a comfortable excuse to drown the pain.

Every Morning is a Brand New Day

Procrastination and Resistance have a sibling they secretly call “the student sister”, but in reality, we call her Good Intentions .
When you wake up in the morning, for that first moment, Good Intentions puts a blank sheet of paper in front of you and in a melodious voice she reiterates that it’s a brand new day, a day that gives you the chance to sculpt or re-sculpt your life into what you want or have wanted it to be. Then, she gives you the chance and choice to write down your desires, with either an erasable pencil or a permanent marker.  She even shows you how to unravel past mistakes if they stand in your way of accomplishments. Good Intentions, however, will only reveal herself in that first enlightening moment of each new day, when none of your thoughts have yet acknowledged the insecurities, chaos and confusion created by her evil twin siblings, Resistance and Procrastination.

Good Intention let’s you plan that brisk walk or hour at the gym that helps build your health and expose you to knowledge and self confidence as instruments to accomplish your dreams of financial independence. Financial independence allows you to turn your back on Procrastination and Resistance with dignity and self respect.

And that brief moment gives you a choice and a chance you best grab, before Resistance opens the curtains just to show you that it’s storming and nasty outside and you’d better reconsider your plans. As Resistance attempts to lure you away from your dreams, you can either believe that again you won’t be going to the gym or take that walk or make that move towards your own financial independence, or you can take the permanent marker from Good Intention’s hand and sign yourself up for Our January WordPress Website Building Bootcamp.

If you do, you will score a major victory over the Evil Twins. Not that they will stop bothering you. They can’t. It’s their nature. But they will have lost their power over you. You’re now in command of your own future.