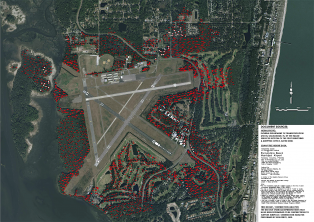 Nightmares of a Naked Island

As the entire island population is getting in uproar over the “criminal” thought to cut 188 acres of trees at the Airport and surrounding areas to facilitate alleged FAA safety requirements, it should be clarified that NO DECISION has been made by the local government. Yet, the thought alone puts shivers down our collective citizenry’s spine, considering the impact this would have on the mid-island’s nature and population, without any economic benefit whatsoever.

In an updated statement on the City’s website it says that the “preliminary” plan WILL NOT be implemented as proposed because it contains serious flaws, even though Ron Price of QED Aviation Consultants, conveniently located on Amelia Island, has an active and solid reputation in the industry (see http://www.njherald.com/story/news/airport-purchase and http://www.emissourian.com/news/st_clair_news/article_dd1f8cde-28ba-11e0-81b3-001cc4c03286.html).
So the next logical question would be to research if Mr. Price was instructed to do a completely new study (the cost should show up somewhere on the city’s budget) or to abstract most of the information from a Survey that was done 10 years ago by a Flagler County outfit then called Florida Mapping Resources. It seems that the latter could have been the case but this could so far, not be independently verified.

As it stands however, on May 11, 2001 Joseph Ricke from Flagler Beach took the picture in question (click on it to see enlarged) as part of a mapping proposal contract with the city of Fernandina Beach to perform a 3DAAP (Three-Dimensional Airspace Analysis Program) Tree Height Survey intended to determine which trees were potential obstructions to the Fernandina Beach airport space and FAA qualification for Instrument Landings.

In the ensuing survey report it was recommended that for Fernandina Beach Municipal Airport to become Instrument Approved under FAA regulation a massive amount of trees had to be removed (especially because of 3 runways).
It seems that now 10 years later the city is picking up pieces of that report to somehow validate the luxury of having a GA (General Aviation) airport on a small mixed use (tourism/industrial) barrier island.
Apparently the recent Million Dollar plus loss in a Lawsuit with McGill Aviation has put the airport square into the focus of our city fathers and this now seems to be a desperate move to find some economic justification for having the airport in the first place. Thinking however that becoming Instrument Approved would tip the balance in favor of cutting all these trees is ludricrous, besides the fact that it would mean the ultimate displeasure of night landings. While studying the Airport Budget I found an entry that mentions 47,000 aircraft handlings a year or on average 129 per day. Am I missing something here or is a mechanic walking the tarmac also considered economic impact as a “handling”. In any case, why would we need night landings in a community where restaurants stop serving at 9pm and the term nightlife is considered a misnomer? Even the City acknowledges in their Noise Abatement Guidelines from April this year that Aircraft Operations should be avoided between 10pm and 7am. If you can’t make it here during operating hours, than Jacksonville would be your best shot would be my advice. One of our executive concierge transportation services will be happy to pick you up for an appropriate fee.

Why the cutting plan was never implemented in 2001

Even in those days of uncontrolled growth, the red dots on the picture created political nightmares and on August 10, 2001 the Newsleader reported that: “Fernandina Beach commissioners again delayed their decision on a newly proposed tree ordinance, voting 3-2 to defer consideration.” And this was in the days of unbridled, uncontrolled growth! Nothing like today, when we want to be a bit careful with dwindling economic resources and taxing the citizenry for facilities most of them will never use.

Yet, while details are still vague and as one commissioner stated: “No decision has been made officially…this issue has not even come in front of the Commission. What I do know is that this exercise was to look at all options for the Airport from as little impact to major impact to the area. I am confident that my fellow commissioners feel the same way but nothing official yet”, the mere fact that it was even brought up warrants utmost caution and therefore public vigilance is strongly suggested.

The Economic Importance of FHB

As it’s quite difficult to obtain any real figures on the Airport’s economic impact for the city and the county, a rather self aggrandizing piece of information put together by the Florida Department of Transportation FDOT reports that among General Aviation airports in Florida, Fernandina Beach Municipal Airport’s (FHB) annual aviation economic impact ranks 35th in payroll of $10.1 million and 37th in economic activity with $31.2 million. For more details on the report you may visit the FDOT website at www.dot.state.fl.us/aviation/economicimpact.shtm. To save you some time however I have included a screenshot of the only page that shows any figures and you’ll be the judge of the information displayed. 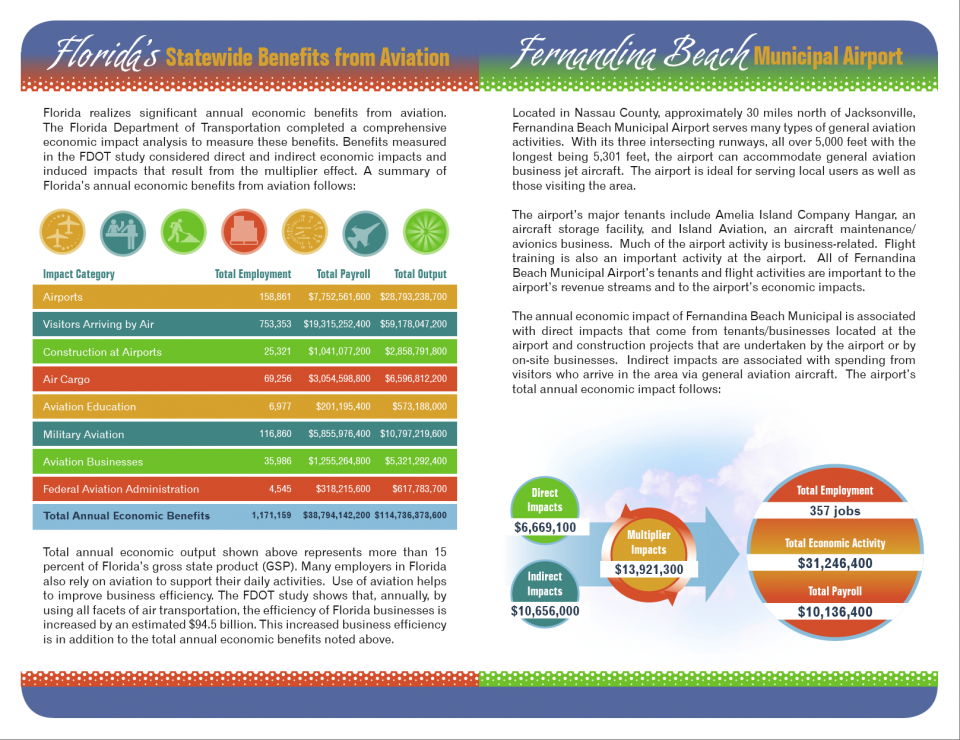 What the FDOT considers the impact of a local airfield

If I would be financial controller at the city however I would want those figures rechecked a couple of times, especially when comparing these figures to the City’s decreasing 2011 Airport Budget that calls for One Fulltime and One Part time Employee with a total payroll budget of $103,093 for 2011. Even when adding some additional personnel to the independent operators like McGill, it should be clear that the airport is not an employment generator. So does it generate any significant income for the city? Well from the looks of it, the best scenario is borderline breakeven and if the Federal and State Government one day soon would decide that there is no reason for FHB to be in business and dry up the grants, it would be shut down time instantly. Not an impossible scenario since grants dropped already 9% from last year. The 2011 Revenue and Cash Balance shows $3,505,000 with a minimal cash balance of which $2.782,000 consists of grants, leaving a true operational balance of $723,000, which is substantially smaller than a professionally operated local auto repair shop with 10 employees.

Maybe it’s time to get real

Obviously we are looking at a very scary picture, not only because of the environmental and quality of life impacts, but even more so because now, more then 10 years later, many aspects that initiated the original survey, have drastically changed. I’m all for responsible progress that incorporates and takes into consideration that the events of 911 have changed the aviation industry to the core, resulting in safety and security requirements that may be financially, administratively and logistically out of the league of what is essentially a municipal airport, serving a very small discretionary group of people.

Unless we are willing to turn the island into “an aircraft carrier” attraction with logistics that will forever change the nature of Amelia Island, we should tread very cautiously, because once the trees are gone, economic growth has taken precedence over quality of life, never to come back. It’s human nature…and I’ve seen it dozens of times with idyllic pristine Caribbean destinations turning into touristic hell holes.
Amelia Island does not have the carrying capacity for an airport expansion, nor a cruise ship port or a race track, regardless of the fact that these monster attractions do not fit the profile (brand) that has been carefully crafted over the years.

Still remaining is also the question of why today’s local government would pick up a study done in a time when we all were delusional enough to think that growth and wealth and safety were solely birth rights of the righteous. Events since then have scarred many of us enough to get better informed and involved.
Assuming that the current commissioners have been elected to initiate and execute programs that have our best interest at heart, I wonder why they would even consider an “impact exercise” for the airport, based on a plan that dates back 10 years ago, when the world was a different place.

Bottom line is that our Municipal Airport, at a stone’s throw from Jacksonville’s aerodrome, has no chance in hell to become a financially feasible undertaking that would support the city’s coffers. Originally designed for the military, it became a comfortable attraction to the super wealthy and a handful of prop-plane air-jockies. Nothing more and maybe less. At this point the island does not even possess a convention center or indoor concert venue of any size that could be used as a justification for even the size of the current airport facilities.

Maybe we should ask Mr. Price to redirect his survey to what he did in a study for St.Clair Airport in Missouri where he stated that: This airport is not critical to the aviation system, both regionally or nationwide, for air transportation used in commerce while capital funds for airport improvements are increasingly in short supply nationally, regionally and locally. Prudent financial management should allow for providing grants to those airports that have the best potential to accommodate growth with the least impact on the environment and consistent with local goals and objectives. Using these criteria as measuring sticks I would think that in the real world Fernandina Beach Municipal Airport would be a thing of the past.