All the government and wall street wants us to do is to give up our frugal ways and start borrowing and spending again. If only the banks would get in line with this thought. 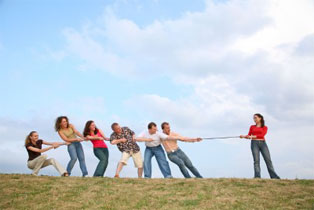 The People vs Washington-Wall Street

This may just be the perfect way to describe the essence of the next decade in the 21st Century. Everyone is into predictions these days as if tomorrow will all at once experience a different mindset with different consequences. I think predicting or forecasting is a very dangerous activity if you are a guru or expert in your field. You’re bound to fall from your pedestal once or twice, because gravity is the true reality of life. Last year Bernie Madoff experienced the power of gravity and this year it was Tiger Woods (See today’s other story).

Remember Alan Greenspan, the Fed Pontificator who brought us bubbled wealth by means of cheap money. We loved the man… well personally I didn’t too much, because I lived (and still do) by the realization that Overheating always will lead to a meltdown. Trees don’t grow into the sky. Mr. Greenspan knew that and should have acted more responsibly with economic growth. But it felt so much better for him to be Mr. Money Bags and we the people couldn’t say no to his charm. His proteg√© Bennie Bernake liked it so much that he took it a couple of notches up as we have seen last year.

There were only a few of us who frowned upon the general belief that homes could only go up in value. There was rhyme nor reason to that notion. A car depreciates when you drive it, a piece of machinery or equipment depreciates, even human beings depreciate. If you don’t believe me, then ask an older person who is trying to re-enter the job market.

Well a house built in the 1970’s – remember those green appliances – had a different floorplan that what is en vogue in 2010; appliances, bathroom sinks, tubs, showers and accessories are completely outdated in color, size, shape and performance and at the end of their lifecycles or beyond, roof needs repair, some termites have entered the foundation, the fireplace needs replacement and the kitchen and bathrooms need a facelift. The cooling and heating system is a dinosaur build for 1970 energy rates and a different wisdom on where to put vents and returns.

Sounds like a seriously depreciated piece of property, doesn’t it? Well apparently not so in the years of the housing bubble. People happily paid triple the real value of those homes with the justification that the land was worth it or the house was rustic and quaint and with a little TLC well worth the money. Well…only if you have the money and can get it cheap. Alan Greenspan made sure you could. And that was CRAP. Because those same houses ended up in bundled mortgage packages, assigned with a fancy name that allowed some real intense leveraging and sold as solid financial instruments across the globe. Americans came to love it…and who wouldn’t frankly? Prosperity like this is addictive and almost impossible to walk away from.

The Government has now committed our great grand children’s pensions in an effort to get us, the people, to start spending and borrowing irresponsibly again. From a Nation that spend 125% plus of its income for years to one that is saving 6-8%, we are looking at an actual net shrink (depreciation) of 1/3 of the previous bubbled economy, if the dust ever settles. Well people that is a shock to the economy that can only be corrected through deflation. Letting the excessive air out of the economy is the only responsible approach. And that’s why I think Frugality (the people) will hold one side of the Tug of War rope in 2010 and the Team Washington/Wallstreet will be on the other side pulling. No government with access to a good printing press will allow deflation in its economy. It’s unthinkable that a Nation under any partisan Stewardship would be allowed to regress instead of progress. So even the naturally occurring deflation period after a totally overheated economy, is not allowed. The notion is evil.

Government will play the Tug of War Game in 2010 with a gun to our head, because midterm election are on the horizon and they have invested (printed) too many trillions of dollars to fail now. Stimulus spending has become an Aphrodisiac that will not abate until recovery is in the bag. But the game will become rougher and their war cry for not playing by the rules of decency will be: It’s nothing personal people, it’s the economy.
And if we don’t comply with their wishes, don’t be surprised when they pull the trigger in the form oil price manipulation and energy taxes.

Oil will be the Leverage

Oil prices are currently kept in the comfortable bufferzone of $70-$80 per barrel keeping the gas prices at the pump around $2.60 a gallon. Like good coffee, the level is neither scorching hot nor luke warm, just right. Will this last? Of course not
Pricing and inventories are kept in balance as a loaded gun with the safety clip on.

If the American consumer does not step up to the plate and starts borrowing and spending again to get the recovery going, oil is the loaded gun to levy and collect instant taxes to get the remaining money out of our collective pockets. It’s not the intention, but if it’s needed, Washington will not hesitate pulling that trigger.

What’s unforeseen in this scenario are the outside factors that may influence oil extraction, such as Venezuela’s heated ideological rhetoric, Nigeria’s internal problems, another blow up in the Middle East, China and India’s growing demand, an overactive hurricane season to threaten the Gulf of Mexico production levels. Any of those scenarios materialize and oil prices will go through the roof without even taxation. And the last looming monster is called hyper inflation, which is a given, considering how much money has been printed lately. A sign? Last week for the first time ever, the dollar increased in value and oil prices went up t the same time.

The big question for the next decade is, will it all descend upon us at one time, or will it be a gradual affair, whose challenges we can face one at a time.
The bet is yours.

At the dawn of a new era of a New Way of Life in the USA, i would like to recommend this story by James Howard Kunstler. It’s a long one, so make a big pot of coffee. But when you’re done, a lot of the Zombie confusion of 2009 will have left the building and you will be ready for 2010 and beyond.