The History of Mini Golf

Rinkiedink mini golf became popular during the depression when obstacle or hazard holes were developed with the help of anything that could be scavenged such as wagonwheels, barrels, pipes etc. 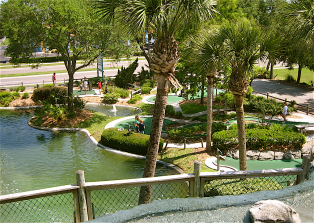 While watching the Masters unfold last night, I learned about the history of Mini Golf. Thought you might be interested.

The game of miniature golf began around 1916 in North Carolina as Golf in Miniature or a short game of regulation golf. The courses were built to emulate the regulation courses, complete with a country club atmosphere and lush greens. Some of the early courses even had caddies.

Miniature golf was one of the first sports to be played in the evening as they were strategically built under lights of billboards or other areas lit brightly enough to allow for evening playing. It became “the thing to do” in the evening after dinner or going to the theatre . It was common to find these courses open until 4am.

With the Stock Market Crash of 1929, regulation miniature golf became too expensive for most people, but the desire to play the game continued to grow. And that’s how “RinkieDink” Golf came into existence. Obstacle or hazard holes were developed with the help of anything that could be scavenged such as wagonwheels, barrels, pipes and curving tires. Some of these scavenger handicap ideas became so popular that clever businesses started to mould and manufacture them as they became the early models for the obstacle laden courses we can still see today.

Miniature golfing became a very popular game among movie stars and other celebrities, which helped to spawn new courses around the country and Tom Thumb Golf became the first trade name developed and patented for miniature golf. They were hugely popular and resulted in “the 1930s Miniature Golf Gold Rush”. New York City had more than 150 rooftop courses and more than 30,000 courses were spread around the nation in those years. Just like the French game of Pétanque, mini golf became a leisure time favorite that could be enjoyed by any age, gender, without any concern for athletic capability or limited physical handicap and at any time of the day. And that is the secret behind the game’s enduring success.

During the 1980s, adventure style courses became more popular, with names like Montasia and Adventure Island becoming household names. Of course many of these were first built and tested in tourism destinations and Myrtle Beach in South Carolina became the Miniature Golf Capitol of the World.

But as with any themed activity, when the newness wears off, popularity declines, as happened in the early 1990s with Mini Golf. By the latter part of the 1990s however, redesigned excitement and attractions in the parks, drew Americans back to the courses and currently courses are built and designed to give players more of a country club atmosphere and experience with lush gardens, meandering streams and waterfalls and real rock formations. The “greens” are complete with undulations, contours and water and sand traps, while many of the new courses are built around a family entertainment concept that includes food and beverage and shopping opportunities.

Amelia Island has a choice of miniature courses on Main Beach and Sadler Road.