The Language of a Lost Era

Roxy delivers a beautiful, helplessly hopeful dismissal in the words "I will have a talk with you as soon as the opportunity presents itself."

Another little jewel from my friend Rick Traum. Obviously deeply immersed in the research for the production of the documentary “Popcorn Palaces”, Rick sent me a little jewel of an old New York entertainment communication exchange: a first generation copy of a 1933 letter typed on Radio City Music Hall Stationary, shortly after it opened. The letter was from Samuel Lionel “Roxy” Rothafel to one John Wenger.

Roxy Rothafel (1882-1936) was a multi talented showman of the 1920s silent film era and the impresario for many of the great New York movie palaces that he managed such as the Strand, Rialto, Rivoli, Capitol, and his eponymous Roxy Theatre in New York City (opened March 11, 1927 with a Gloria Swanson production, demolished October 1960). He opened Radio City Music Hall in 1932, which featured the precision dance troupe, the “Roxyettes”, later renamed the Rockettes.

Roxy Rothafel, at the height of his career, wrote this “don’t call us, we call you note”, brutally exposing the elegance of an era, we have long since lost. And this fact alone makes the letter in my eyes an actual piece of Americana history exchange. Roxy delivers a beautiful, helplessly hopeful dismissal in the words “I will have a talk with you as soon as the opportunity presents itself.” I love it. 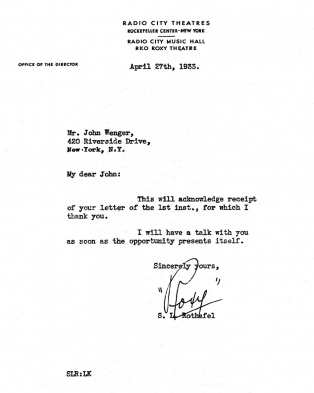 Compare that to today’s most polite rejection phrasing: “We regret to inform you that at this time we have no employ for your services”. The different nuance makes this note priceless.
The recipient of the note was no less than one John Wenger, a celebrated easel painter and stage set designer whose career included 25 solo shows in the USA, Canada, and Europe. He was called a “creator of pictoral symphonies” doing sets designs for such plays as “Ile”, “Petrushka”, “Funny Face”, and Rhapsody In Blue”. John Wenger’s art is included in many museums in and out of the USA.

Rothafel’s  breakthrough career started in 1914 when developer Mitchell Mark hired him to manage the 2,989 seat Mark Strand Theater, the first genuine Movie Palace in New York City.
The Mark Strand Theater in New York City, had opened in 1913 at the cost of one-million dollars ($22.2 million 2010), is usually cited as the first movie palace of the United States, and its success in drawing the upper middle class to the movies spurred others to follow suit.

Many movie palace architects, like studio heads and impresarios, were often first generation Americans, such as the Romanian-born John Eberson and Scottish Thomas W. Lamb.
S.L. “Roxy” Rothafel is credited as the originator of the deluxe presentation of films with themed stage shows and movie presentation innovations, including synchronizing orchestral music to movies (in the silent film era) and having multiple projectors to effect seamless reel changes. These improvements “justified” the design and construction of the famous movie palaces – (Popcorn Places). 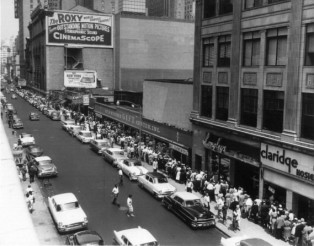 The attraction of the Movie Palaces expressed in the long lines to get in.

As their name implies, movie palaces, like other products of the age, were advertised to “make the average citizen feel like royalty.” While inscribed with democratic sayings and patriotic imagery, they consciously referenced the grandeur of aristocratic Europe and were often decorated in European fashion.

Roxy also made a name for himself on radio, as he began broadcasting nationwide in November 1922, and throughout the 1920s. His live broadcasts from the Capitol Theatre became increasingly popular. One estimate from 1924 placed his typical radio audience at about five million listeners nationwide. This of course helped him in his endeavors to create his own movie palace empire, starting with the almost 6,000 seat Roxy just of Time Square, with nearly bankrupted film producer Herbert Lubin, who initiated the lavish project. Roxy abandoned his dream and after the 1929 Market collapse gained a reputation as a solid operator of entertainment palaces, which got him involved in 1932 in the development and opening of the World Famous Radio City Music Hall.

Thanks Rick, for sharing this. I am truly going to be looking forward to the production of Popcorn Palaces if you keep feeding us these little jewels.