The Lies that Hide in Statistics

Whether it's ignorance or intentional deceit, the market commentators today are dangerous to your prosperity and well being. 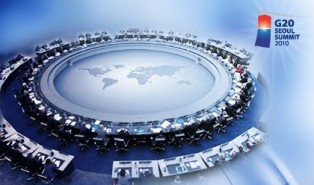 Another wasted effort to regulate greed

I was considering an apology to readers who are getting tired with my insistence on reporting the real facts on the economic situation. Especially this week when G-20 is meeting in Seoul South Korea and Obama has decided that this event is important enough to crash the party with 3,000 of his closest friends, traveling in 40 planes and 6 armored cars, it is more important than ever to understand the enormity of the dog and pony show we are currently being served. But I decided I don’t have to apologize for being genuinely concerned for our future.

What a show! Treasury Secretary Timmy Geithner has been sent out as point man to make sure that things remain friendly at the Summit, as the chance is real that some emerging countries may heavily protest last week’s $600 billion second round of financial easing. Some are actually comparing the liquidity in the financial markets with diarrhea from an upset stomach and voices are once again getting louder that the US Dollar should be de-throned as the world’s reserve currency. And it seems that many investors here in the USA agreed with that today as they made it clear once again that they have no confidence at all in the US dollar, nor the economic recovery, and consequently pushed gold to $1,403.50 for December deliveries. Now most people have no clue what that means and what the consequences are to their own life and jobs.

And I cant blame anyone because I think it is truly astounding how market commentators leap in ignorance on every piece of economic data; they merely look at the headline, and then make a judgment on whether it is weak or strong.  For example, the U.S. payroll report that came out last Friday was spurious, at best, said Dr. David Rosenberg, chief economist at Gluskin- Sheff with a particular keen eye on the realities.

His daily newletter continues with: “Yes, yes, the +151,000 headline was nice and well above expectations, but it was also highly concentrated in just a few service sector industries, led by waste management. For an economy gone to waste, maybe that’s totally apropos.

But let’s get real here.

The raw data showed that 919,000 payrolls were somehow created in October, which therefore would have made this the second strongest October in the last 11 years — in October 2009, the tally in the raw nonfarm payroll data was 646,000 even though the economy then was accelerating at a 5% annual rate. That 919,000 not seasonally adjusted surge in October far surpassed what we saw at the peak of the cycle in 2007 (740,000 jobs) as well as the boom periods of 2006 (698,000) and 2005 (727,000).
The data bear no resemblance to the reality of an economy barely growing at all in real per capita terms.
For a bond or a stock trader, it all comes down to the headline nonfarm payroll number. For a labor market analyst however, what is important is the information that comes from many parts of the Household survey.
So the question here is, who in their right mind could ever refer to the jobs report — it is an entire report, by the way — being strong when the employment-to-population ratio (the “employment rate”) dipped two-tenths of a percentage point to 58.3% in October. The labor force plunged or contracted with 254,000 and the participation rate fell from 64.7% in September to 64.5% — the lowest level since November 1984! How is that considered bullish for heaven’s sake?

If not for the slide in the labor force last month, the unemployment rate would have gone back up to 10% in October!

And this statistical mirage was not confined to the employment data. Last Friday afternoon, we also received the September release of consumer credit from the Fed. The headlines read how consumer credit rose $2.1 billion in September and pundits were questioning how there could be a credit crunch with net borrowings rising for the first time in seven months. But take a look at the credit data and here is what you see happened in September:

But … federal government supported consumer credit surged $27 billion, on top of the $26 billion runup in August — completely unprecedented and very likely hooked to public sector financing for student loans (ergo, nothing to do with the economy).
In other words, consumer credit outside of government loans is collapsing at an alarming rate — for eight months running and more than $20 billion alone in September.

The 4 Horsemen of the Apocalypse are in my humble opinion Housing – Credit – Energy and Employment.

You can believe the ignorance of the market commentators and hope and pray with every fiber in your body that things are on the upswing, and frankly for a short period of time, they may seem that way, considering the enormous financial liquidity the government has been inundating the market with, but don’t be deceived into thinking that this will last beyond 12 – 24 months – if it happens at all. Know that inflation will be heading this way

Just look at the horsemen, even if you don’t understand the underlying economics.
• Energy prices went to this year’s highest point today
• Credit is collapsing at a unprecedented speed
• Housing only moves in the underwater zones/foreclosures/short sales with an inventory that will dictate pricing for years to come
and
• Employment? There is really nothing that I can add to above statement, even if I would accept 10% as the real unemployment number.

So if you are getting tired of my reports on the economy, than my suggestion is to stick your head in the sand until you become the favorite Piñata of ignorance, because I will keep on trying to clarify and simplify what is really going on in the marketplace, far removed from the opinions of market commentators with ulterior motives. However if you have the gut feeling that our economy is not going in the direction of recovery, you may want to stick around a bit longer as I’m going to explain what we are planning to do about your financial future during our “Five Days in January” seminar. Stay tuned.