The Pitfalls of IQ Tests in Job Interviews

When your job hunt includes an IQ test, I advise you to take your time to read, understand and analyze the questions. 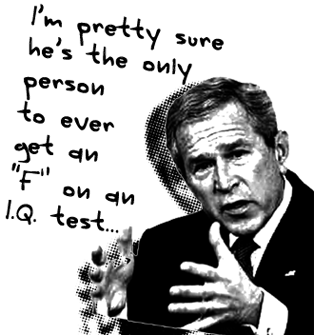 George W was not a dummy!

Believe it or not “W” scored in the top 10%¬† (120 plus) in the Nation when it comes to IQ levels. But he probably would not have been answering the following questions correctly. As a matter of fact, when researchers put the following three problems to 3400 students in the US, only 17 percent got all three right. Were the other 83% tricked or not? Do multiple choice answers trick people?

2) If it takes five machines 5 minutes to make five widgets, how long would it take 100 machines to make 100 widgets?

Even if you got all 3 answers right (see bottom), they are still considered trick questions because they are worded in a way designed to draw out an incorrect response if you don’t think it through. You’re initial response to the question is the incorrect one; your rationalized response is correct.

The fact is that most people will answer 10 cents, 100 minutes, and 24 days. Yet if you presented the questions purely in mathematical terms they would get it right. As a word problem, they are designed to make you answer incorrectly. And because we are living in a society that does not allow time to rationalize, we scan the question, rather than read and understand.

Why IQ tests are bad for Job Interviews.

Why this introduction? Because I think that the problem with IQ tests is that while they are effective at assessing our deliberative skills, which involve reason and the use of working memory, they are unable to assess our inclination to use them when the situation demands. This is a crucial distinction. I know, because I have been tested about half a dozen times in my life and all the results put my IQ in Mensa circles, yet my wife’s street smarts outsmart me anytime. It’s all about applying yourself.

Prof. Daniel Kahneman (http://www.princeton.edu/~kahneman/) at Princeton University puts it like this, ” Intelligence is about brain power whereas rational thinking is about control”.¬† Another metaphor that researchers use to explain IQ is: IQ is the amount of power of the light you can potentially shine, but if you do not aim it in the right direction, it is all wasted. Even though I do understand the meaning here, I do think that rationalized IQ provides a quicker access to out-of-the-box solutions, especially because the light shines somewhere else. And that is where George W’s shortcomings became visible.

IQ scores are increasingly criticised as poor indicators of an individual’s all-round intelligence, or abilities in a particular profession. I agree with palaeontologist Stephen Jay Gould who claimed in The Mismeasure of Man in 1981, that general intelligence is simply a mathematical artefact and that its use is unscientific and culturally and socially discriminatory. Unfortunately many jobs still require some type of testing that measures IQ without taking the rationalization process into consideration.

When your job hunt includes an IQ test, I advise you to take your time to read, understand and analyze the questions. If you understand the question, you have rationalized 50% of the answer and that has nothing to do with IQ.