The Polarization of America

Benjamin Franklin has apparently said once: “Rather go to bed without dinner, than to rise in debt,” an advice that no longer holds merit in the US 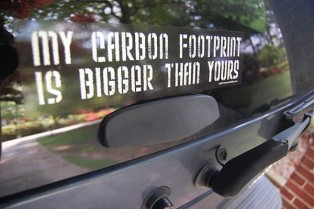 Drill Baby Drill (and Get Your Fill)

I subscribe to a large number of (at least in my opinion) balanced news sources and blogs to get a better grip on where our western society and this nation is going and I can only observe that the current polarization is rather frightening. The next several months leading up to November midterm elections should prove at least interesting, with a hint of danger in the air.
What’s even more disturbing is that it plays on so many fronts and platforms as witnessed by early election surprises such as South Carolina’s Alvin Green, that the run up time is now promising a long hot summer, as Arizona is getting ready for it’s first real test next month.

Have you ever seen a black Hummer driving around town, complete with a “Drill, baby drill” bumper sticker?
As a marketeer I admire that slogan. It’s a fabulous slogan.
Slogans are powerful when they use few words (two! one used twice) to unite, energize and signify a tribe. You’re either an insider or an outsider, but you can’t sit on the fence on this one. Nike’s “Just Do It” is another one.
When “Baby” first was introduced, the slogan captured a can-do, engineering-centric, please-get-out-of-my-way, anti-intellectual, regulate-industry-less mindset that this driver (and presumably others in his tribe) could broadcast and be motivated by. In three words! A key part of the slogan is the elusive word ‘baby’, which reinforces informality, certainty, possession and the impatience with bureaucracy.
Support it or not, I have to agree that it was a great slogan, until it wasn’t… because it polarized opinions without consideration for the solutions.

If we insist on driving SUV’s and other 8 cylinder gas guzzlers and not pay more than $3 per gallon at the pump, there won’t be another option available than drilling and hoping for rich, rich fields, without any overriding consideration for accidental disasters that lead to polluted marshes, beaches, wetlands and wildlife. Only America has the expression “you can’t have your cake and eat it too” while secretly acting as if we actually can. There is a price to pay. Always.

Like most good political slogans, “Drill Baby Drill” called for something to happen in the future, something someone else would do and be responsible for, nothing that could come home to roost in a really short time. Of course, few could predict how close the future actually was. Unfortunately for the Pro group, they picked a slogan that had a short term expiration date.

“Democracy is good” is another three word slogan that carries a world of meaning and history. Unfortunately it now looks like its days are numbered as well. Many people died to protect or spread democracy around the globe and proponents claim that it is the best of all systems, even when it has deteriorated to the point where a nation is as firmly polarized as are these United States. Polarization of opinion is one thing, it can still harness respect and admiration. Polarization of action means digging heels into the mud, drawing lines in the sand with the promise that crossing the line will be severely punished. And that’s where we have arrived as a Nation.

Not even 17 months in office, Obama’s White House is already manoeuvred into the same corner where Jimmy Carter landed. Carter was as innocent to the Iran Hostage Crisis as Obama is to the Oil Spill, but he is already a Snake Bit President in a time that bipartisan leadership is the only thing that can possibly save this country from an all out currency crisis. People’s attitude towards personal debt has developed like a drunk driver in a high speed pursuit on “Cops”:  if they’re not scared out of their mind wondering how they ever got into this mess, they don’t care anymore.

Benjamin Franklin has apparently also said once: “Rather go to bed with out dinner than to rise in debt.” Even though Ben has apparently added a lot to America’s wisdom, he couldn’t prevent that his warning changed completely during the easy-money bubble years, and now finds the population well squished under the pressure of its many debts. Even bankruptcy, which only a handful of years ago carried with it a stigma on the order of being collared as a petty thief, has today become an acceptable tool in personal financial planning. Debtors and creditors are preparing their fight on either side of the fence as politicians frantically follow the public mood shifts. Polarization usually leads to war or secession and many states are taking a distance from Washington DC, while cities and municipalities are looking for ways to dis-incorporate while keeping certain benefits and services alive.

So what are the prevailing cultural attitudes that make the nation so susceptible to being manipulated by the politicians and their need to polarize us all? While I’m sure you’ll have additional thoughts, but here’s my short list:

•    Government is the cure-all. Even so-called conservatives almost invariably will call upon the government to “do something” about a situation they feel needs attending to. The only difference between them and the liberals is in the details of what that “something” should be.
•    The free market is bad.  It has gotten to the point where 98% of the population wouldn’t know what a true free market looks like, even if one stepped on their collective feet. Of course, the minute you start regulating a free market, it is no longer a free market.
•    The world is a dangerous place.  While there are certainly pockets of the world that are dangerous, they are far and few between. Yet, the politicians will regularly stoke these fears as if hordes are bunching up at the border, in order to boost their own political fortunes by being seen as “tough on defense.” The end result, however, is that all manner of meddlesome legislation is passed, supported by a public increasingly willing to trade their domestic freedoms for security. And, while they are at it, blindly bear the cost of the world’s largest and most expensive military by a very, very large margin.   Related, there is an attitude that everyone hates Americans – but speaking as someone who has traveled widely, nothing could be further from the truth. What foreigners do hate/mistrust is the American government – a natural outcome given the nature of an empire. Obama gave the impression he was going to change that. He didn’t and in addition he is now alienating the American friend nations.
•    The government has a responsibility to look after those that are unable to help themselves. This is a mainstay of politicians who take every opportunity to coo about the “greater good.” Yes there are older people whose pension has blown up on them; there are people with disabilities, mental and physical; there are minorities; single parents with too many children and too few job prospects, “illegal” aliens that abuse the systems in place, versus those that actually pay taxes without getting securities in return.   I am absolutely not trying to be insensitive, but rather just making the point.

Generally-speaking, Americans are a caring and well-meaning folk – but this particular sensibility is one that is richly mined by the politicians who play the “care card” as reliably as a magician pulls rabbits out of hats, rather than creating a fundamental care system that involves certain personal responsibilities. Arizona’s immigration problem is not going away without a fundamental reform, it will only polarize positions and increase violence.

•    Regulation is necessary. And so we have regulations by the boatload, with politicians of all stripes quick to propose more at the drop of a hat. If something occurs that is considered unpleasant and it makes the national news, you can bet that some politician will quickly be proposing a regulation to avoid it happening again. No time for natural balancing of a potential anomaly.
•    Making too much money is bad. Even the rich guys themselves, Warren Buffett to name one, regularly come out with proposals for increasing progressive tax burdens to make the rich pay their fair share. The Obama administration has been very direct on this point, making statements to the effect that it’s time for people who have managed to accumulate wealth to step up to the plate and pull their weight. Of course, that ignores the fact that the top 10% of Americans pay more than the bottom 90% combined – but that’s the point: It is by tapping into the zeitgeist that the politicians strike pay dirt.

The mere existence of 6.8 billion humans on this planet is bad for the environment. The popular version of this current tale has it, that each human footprint is a net negative to the environment and that we humans should be apologetic for our very existence. Even the act of breathing – exhaling carbon dioxide – now falls under the government’s newly assumed control over “greenhouse” gas. Polarization is creating a lot of empty discussion with pros and cons pulling the Tug of War, without real change.

Maybe we should learn from the Sperm Whale

Scientists at Flinders University in South Australia recently found that in an awesome example of design by Mother Nature, Southern Ocean sperm whales offset their carbon footprint by simply defecating – an action that releases tons of iron a year and stimulates the growth of phytoplankton which absorb and trap carbon dioxide.
If only we humans could say the same for our poop, which really doesn’t do much more than just sit there.

Well as of tomorrow I’m going to do my part by buying some iron supplements and a can of chili, and head off toward the ocean when the pressure arises.  I’m sure it’s going to be another hot summer day here in North East Florida.