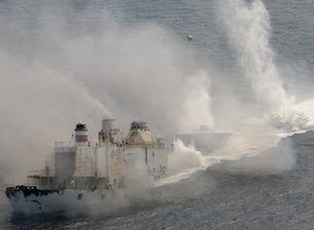 On May 27, 2009 at 10:21 AM charges were detonated onboard the USS Vandenberg sending her, in one minute and 44 seconds, to the ocean floor off Key West Florida. She is now noted as the second largest ship ever intentionally sunk to create an artificial reef. At 523‚Äô in length she is lying in 140‚Äô of crystal clear Florida Keys water upright and as majestic as ever.

The General Hoyt S. Vandenberg will measure ten stories high in the water column with the keel nestled in at the max depth of 140‚Äô. The Vandenberg was best noted as a tracking ship and was very instrumental in following space fights especially the 1960‚Äôs pre-lunar landing phases. This new reef site is sure to become a hot spot for recreational divers and sport fisherman alike as the creatures of the sea find it to be a great new place to call home. This site came soon after the May 17th, 2006 sinking of the 911‚Äô aircraft carrier Oriskany some 24 miles off the shores of Pensacola Florida. The Might O, as sailors affectionately referred to her, served her country proudly from 1945-1976, including WWII, and the Korean and Vietnam wars.

Like the Vandenberg these huge floating post war time machines have a life expectancy and regardless of how much tax payer dollars you throw at them they will all succumb to being mothballed and rendered useless. As an avid diver and fisherman I am elated that opportunities such as artificial reefs are available for these old gals that stood for our country‚Äô freedom and protected us from the evils of the world for so long; instead of being cut to pieces in some third world ‚Äúbone yard‚Äù these mighty ships continue to serve their country on another level.

I have had the chance on several occasions to dive an intentional wreck such as these also located in the Florida Keys. The ships name is the Thunderbolt, a pre WWII experimental floating lightening rod; the boat spent the bulk of her life chasing thunderstorms in an attempt to get struck by lightening for research purposes. She now rest off the city of Marathon in 115‚Äô of water and has rested comfortably there since March 1986. The fish life living on this boat is overwhelming. Every species you can think of in Florida calls the Thunderbolt home including 2 huge resident Jew fish that are well over 1000LB each. Last year my daughter and I made the yearly dive on the ship and were greeted by one of these goliath fish hanging around the wheel house which incidentally has one way in and one way out. Shannon and I were right in the way of the only exit. The fish, which is literally the size of a Volkswagen Beetle, allowed us ample time to remove ourselves from the exit and a once in a lifetime opportunity to swim right next to her for several seconds; a memory neither of us will ever forget.

With our Navy‚Äôs fleet aging quickly I am left to wonder what it would take for Amelia Island to secure one of these ships to use as a natural reef off of our shores. A question that has many answers I‚Äôm sure peppered with politicians and bureaucracy that could circle the globe twice, but if successful, what a cool thing that does so much good for the marine world we would have.