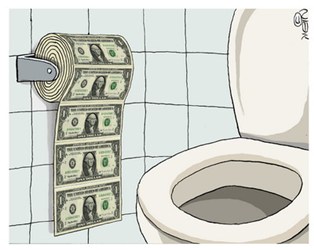 Commodities headed for the biggest monthly rally in 34 years, led by energy, as the slumping dollar boosted demand for raw materials as a hedge against inflation. Gold and silver are soaring up 23 & 27% respectively for May and oil‚Äôs rising fast closing at $65.56. In May, the Reuters/Jefferies CRB Index of 19 energy, metal and agricultural prices has gained 14 percent, the most since July 1974. The dollar was poised for the biggest monthly drop since August against a basket of six major currencies. The markets are closing the week Friday still whole. Don‚Äôt bank on that lasting too long. There is a ‚ÄúReality Disconnect‚Äù‚Ä¶U.S. business activity contracted at a faster pace than forecast in May as orders dropped. Unemployment, already at a 25-year high, is forecast to keep climbing and home foreclosures are at a record. Bankruptcy looms at General Motors Corp., the biggest U.S. carmaker. ‚ÄúI don‚Äôt know where all the optimism for the economy is coming from,‚Äù said Gijsbert Groenewegen, a partner at Gold Arrow Capital Management in New York. ‚ÄúWhen you look at housing and autos, all of those things are still weak. There is a disconnection between what the reality for the economy is and what people think.‚Äù Here are the final stats for the week. All of these gains were in the final 20 minute of trading which is BS‚Ä¶.The Dow Jones industrial average .DJI rose 96 points, or 01.15 percent, to 8,501.28. The Standard & Poor’s 500 Index .SPX gained 16.1 points, or 1.77 percent, to 910.89. The Nasdaq Composite Index .IXIC added 22.54 points, or 01.29 percent, to 1,774.04. Be careful, very careful.