There is More to Florida than you Know

Want to Talk to the Dead, Ride in a UFO, Meet Monkey Girl? Florida’s the Place

Pick up a copy of Lynn Waddell’s book “Fringe Florida” and you’ll discover some oddities you never imagined existed even if you’re a second or third generation native.

For example, did you know there is a small town 145 miles south of here between Orlando and Daytona Beach called Cassadaga that is dedicated to spiritualists who say they converse with the dead, is populated by psychics and mediums, and has consequently been named the “Psychic Capital of the World?” Ask our pal Pajama Dave and his girlfriend Zan Maddox about it as they’ve been there and have some spooky tales to tell about their unnerving overnight visit. 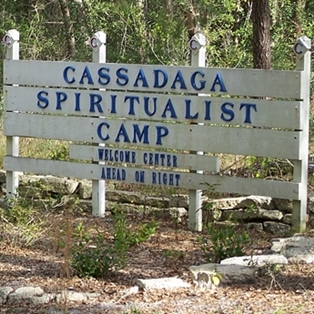 Or maybe you want to join a group of folks who sit around on the beach waiting to be picked up by a UFO, join a granny motorcycle club, or visit Gibsonton, a town populated by circus and carnival sideshow performers ranging from the Lizard Man and Lobster Boy to the Monkey Girl and the Human Blockhead.

On our way to Sarasota and Fort Myers, before the Sunshine Skyway was constructed, my mother used to stop in Gibsonton, which is on Highway 41 and was about a half hour south of our Tampa home, to visit the Giant’s Fish Camp, a dive bar and grill, where the owner was the retired circus giant and his wife the retired “fat lady.” I was more fascinated by what was out back though, where a swampy dilapidated chicken wire enclosure was populated by what I remember were a whole bunch of alligators of all sizes and I was allowed to toss them food scrapes. The town also had a midget police chief and in my child’s imagination I always thought it would make a cool Rod Serling Twilight Zone TV episode, with the show opening as a drunk speeding through the little town gets arrested and sobers up to be confronted by a gathering of bizarre local inhabitants.

Oh, and the book will also introduce you to some of the oddest swinger clubs in the country, claiming Florida is home to more of these than any other state. If nothing else it’ll give you some interesting suggestions on what to tell friends, relatives and tourists when they ask what other things they should do while visiting the sunshine state. Why bother with Disney or any of the other fantasy parks when you can go see the real thing? Just be careful where you take junior though.

Crime-Free, Pollution-Free Paradise? And speaking of unusual Florida locations, according to reports from Bloomberg News, our state boasts the fastest growing metropolitan area in the United States and one that is also crime free, has almost no pollution, no children, and is just a little more than 150 miles southwest of Amelia Island, or about a three hour drive. With a population of some 110,000, The Villages, is the world’s largest retirement community and growing on par with megacities such as Lagos, Nigeria and Dhaka, Bangladesh, experiencing a 5.2 percent surge in growth this past year. It’s about 60 miles northwest of Orlando, and just a few miles southeast of Ocala. Golf-cart accidents have killed more people there than criminals, said Elaine Dreidame, president of the Property Owners’ Association of The Villages, which is about the size of Manhattan and has more golf carts than that New York borough has taxies. The Villages, which has rules governing how long children can visit and follows an age-restricted model used by developer Del Webb’s Sun City in Arizona, sells new homes ranging from $150,000 to $1 million. It also has been reported that the Villages population boasts 10 women to every man, has one of the highest sales of Viagra anywhere, a thriving swingers scene among married couples, as well as an alarming rate of sexually transmitted diseases. So, for a “good time” if you’re 55 or over head south and grab a granny.