Totally in shock and devastated as his life was taken, long before he was done giving. 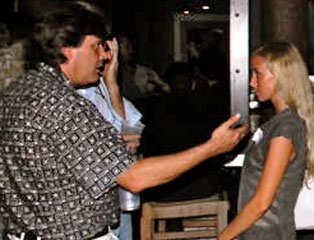 Teaching was his absolute passion.

With great sadness and devastation we learned that our webmaster, friend and my brother, Thomas Ramakers passed away last Friday from a massive heart attack while visiting his wife in the Dominican Republic.
I’m writing this as the shock and devastation is still so much larger than the understanding.

Strange is in hindsight that he spoke with about everyone he had immediate dealings with at this stage of his life just the day before; he attended a party that evening for his wife’s daughter’s graduation, which he had encouraged and financed; his emails 5 hours prior to his passing were upbeat…and than he was gone!

51 is too young, even if we don’t get guarantees. The only thing we know is, he had so much more to give….he wasn’t done yet, not by a far stretch. Thom was a teacher  who loved to pass on what he had learned and while he was learning. His appetite for learning was voracious and his intensity to pass this on sometimes overwhelming.

Straight out of highschool at 17, he was signed by a Dutch professional soccer club on a promising contract. He played his first game, scored three times and broke his ankle, a career ending event.
Laconically he shrugged it off and decided to pursue medicine instead and became an MD at age 22 with natural healing as specialism. He operated a very successful practice for about 8 years, but turned increasingly disillusioned as the medical establishment kept questioning his highly successful natural healing methods and procedures. So disappointed actually that after visiting me in the Caribbean Islands in the late 1980s, he decided on a career change, sold his practice and moved to St.Maarten, where we ran several tourism related marketing companies for more than a decade.

Having a God-given natural ability to correctly diagnose problems and focus on solutions, Thom did not need a formal education in Internet Technology. He was there from day one and very early on had sold his soul to Apple Computers and learned everything about website building and online technology, while constantly upgrading and updating his knowledge and understanding.
Thom and internet technology were joined at the hip like a scientist and a lab; he was driven and consumed by it.

Thom’s life was far from finished when his heart gave out last Friday and neither is his legacy. He had plans and visions and was working on the future. We daily had long dialogs and conversations. I could throw him bizarre ideas and he would somehow make the technology work for the internet.

He was not frail but his health was not superb either and even though he loved the islands and the water, his favorite worktime and pastime was in front of his computers in an air conditioned room. Sixteen hour days on the computer were rule and not an exception for him and those who did meet him under social circumstances got a rare glimpse of his brilliance, often beyond the realm of total understanding.

He particularly loved French wines, which he had studied intensely and tasted even more; he loved gourmet cooking which he did with the same sense of perfection as a medical diagnosis.

We may pale a little trying to fill his footsteps, but it is our privilege and objective to remember everything he ever taught us about the internet.

Thom’s Star is shining brightly somewhere out there in the Universe. It will light us on our path to Carry On.

I miss you very much My Brother and Friend