Until we see signs of improvement in any or all of three areas, no solid long term recovery is expected. 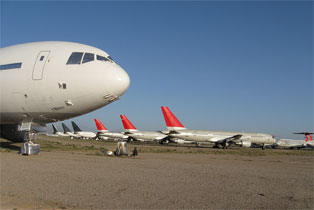 Overcapacity of planes, trains and everything else

No matter if the Dow Jones gets the better part of 10,000. No matter if the media keep saying it’s getting better. Maybe on Wall Street, but not on Main Street. The economy is still facing three major problems to overcome, and that won’t be addressed any time soon.

Problem Number One: There is a huge excess capacity in manufacturing, commercial and residential real estate and capital asset inventories. It will take months, maybe even years to bring these back into operation, and that is only if demand picks up. If it doesn‚Äôt, companies will be forced into cutting back more workers and capacity. Additional job losses mean demand falls further, continuing a vicious cycle.

Problem Number Two: Out of 100 bonds issued this year so far, less than ten will use the extra money to seek expansion or spend it on R & D. The other 90 are stashing it away. Companies aren‚Äôt spending.

Problem Number Three: The banks aren‚Äôt buying into the phony recovery and are still in shock of their mistakes of the past. Lending has now fallen for six straight months. Total lending to businesses and households is now down to $6.75 trillion from $7.32 trillion last year October. The government hoped to push the so-called recovery along by pumping more money into the economy. But instead the banks are sitting on their piles of money and the consequently weakening dollar is pushing up energy cost.

Until we see signs of improvement in any or all of these areas, no solid long term recovery is expected.