To Drill or not to Drill is the Question

Drilling for oil independence in our coastal waters should be an important agenda point in the US energy strategy. 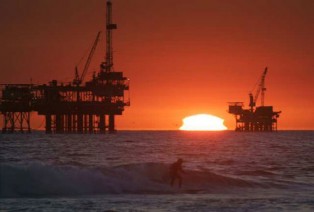 Will this one day be the view from our beaches?

Well it seems we are at it once again.  The President during the campaign promised he would not permit drilling for oil off the coast of the US.  It now is clear he has changed his mind on that issue.  He has now issued his approval for setting up oil rigs and drilling off any coast that has the possibility of oil.

I guess the over whelming question here is should we, or shouldn’t we?  There are those who will fight this with every fiber of their being.  Then on the other hand there will be those who will welcome it.  Each of us have our own opinion as to what should be done.  I for one have always thought if we have oil then we should tap it and use it.  Why would we want to be beholding to foreign countries when we may not have to be?

I overheard our Senator, Bill Nelson make the argument that he was not in favor of drilling as it would take ten years for us to see the change at the pumps.  Let’s assume he is right, ( I think it would be much sooner),  At least we would be a little closer to not be dependent upon other countries.  Russia and China will be drilling off the coast of Cuba and soon.  If you think about it, we are only talking 90 miles between Miami and the Cuban coast, that would be the same oil that could be on our side of the table.

Am I for it?  Yes, I am.  I understand and appreciate the fact that there are those who are afraid of a spill and damage to our coast, that is a chance that will have to be taken.  We are faced with these types of damages daily, a tanker could hit our shores and produce heavy damage.  It is unfortunate that we simply can’t legislate a “perfect world”, there will always be those who will continue trying though.

Let me know in your comments what you think.