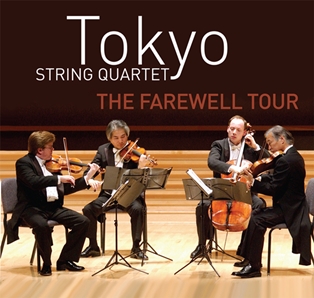 Fernandina Beach, FL – After 44 years, the acclaimed Tokyo String Quarter will retire at the conclusion of the 2012-2013 season, and the Amelia Island Chamber Music Festival (AICMF) is proud to be included on the ensemble’s farewell tour.

The 7:00 performance on Friday, October 5, will be held at the beautiful Amelia Plantation Chapel, 36 Bowman Road, Amelia Island. Tickets for premium seating, which includes a post-concert champagne reception, are $100. General admission tickets are $50. Tickets are available online at www.aicmf.com or by calling the AICMF office at 904-261-1779. The Tokyo’s October 5 performance will include music by Haydn, Webern and Schubert.

Recognized as one of the world’s greatest chamber ensembles, The Tokyo has captivated audiences and critics around the globe since its founding nearly 45 years ago. The Tokyo has collaborated with a remarkable array of artists and composers and built a comprehensive catalogue of critically acclaimed recordings. In residence at New York’s 92nd Street Y and performing over 100 concerts each season, the quartet has a devoted international following.

Ensemble members Kikuei Ikeda, second violin, and Kazuhide Isomura, viola, announced their plan to retire last fall, leaving Martin Beaver, lead violin, and Clive Greensmith, cello. Beaver said, “We had no shortage of fine applicants auditioning for the positions of second violin and viola. It is a difficult prospect to replace one long-standing quartet member. To replace two of them simultaneously is a Herculean task. With the retirement of our colleagues in our minds, we increasingly felt over the last few months that the most fitting way we could honor and celebrate our quartet’s long and illustrious career was to bring it to a graceful close.”

The Tokyo has long been embraced by audiences in such music centers as New York, Cologne, Madrid, Vienna, Copenhagen, London, Paris and Milan. The ensemble also performs at many leading festivals, including Santa Fe, Austin, Tucson, La Jolla, the Pacific Music Festival in Sapporo, Japan, as well as the AICMF.

The ensemble has released more than 40 landmark recordings, and performances of Brahms, Debussy, Dvorák, Haydn, Mozart, Ravel and Schubert have earned the Grand Prix du Disque Montreux and “Best Chamber Music Recording of the Year” awards from both Stereo Review and Gramophone magazines. The Tokyo also has received seven Grammy nominations.

The Tokyo String Quartet traces its origins to the Toho School of Music in Tokyo. Instilled with a deep commitment to chamber music, the original members of what would become the Tokyo eventually came to America for further study at the Juilliard School of Music. Soon after its formation in 1969, the quartet won First Prize at the Coleman Competition, the Munich Competition and the Young Concert Artists International Auditions.

The ensemble performs on the “Paganini Quartet,” a group of renowned Stradivarius instruments named for legendary virtuoso Niccolò Paganini, who acquired and played them during the nineteenth century. The instruments have been on loan to the ensemble from the Nippon Music Foundation since 1995, when they were purchased from the Corcoran Gallery of Art in Washington, D.C.

About the AICMF
The Amelia Island Chamber Music Festival is a not-for-profit, tax-exempt organization under Section 501(c)(3) of the Internal Revenue Code. Entering its twelfth season, the Festival has become one of the largest events of its kind in the Southeast. The AICMF also provides education opportunities for young aspiring musicians from the nation’s leading conservatories. For more information about the Festival, visit our web site at www.aicmf.com.