Tornadoes are one of the fiercest storms to be released by nature! For a tornado to form the atmosphere must be unstable. 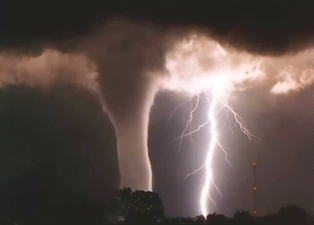 Tornadoes are one of the fiercest storms to be released by nature! For a tornado to form the atmosphere must be unstable. They are formed when the warm, moist air near the ground meets with relatively cool, dry air in the upper atmosphere. The south and southwest of the United States experience a larger than most number of tornadoes in the spring, when the cold winter weather flows in from the north and is not so welcomed by the warm, moist air enticing summer to arrive from the south.

Tornadoes form from thunderstorms, but not all thunderstorms produce tornadoes. A supercell, which is composed of several smaller thunderstorms, is needed to give time for wind to come into the storms creating a tornado.

As the updraft of a storm draws in air, it changes its direction from horizontal to vertical. The rotating updraft sucks more air, and possible other things, up into the vortex.

The downdraft inside of the tornado, caused by the cooler air found in the upper part of the storm, will eventually cut off the updraft and basically starve the tornado of fuel.

Tornadoes, or twisters, are shaped like a funnel and can have wind speeds of over 250 mph.