Towards a Decade of Citizen Diplomacy 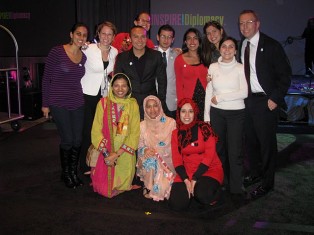 People communicate much easier than politicians

The subject of  Citizen Diplomacy has been dear to my heart since we started The Travel Agency in 1974, so when a message came into my inbox that Matthew Upchurch, CEO of Virtuoso, was invited to speak at the summit to Expand Citizen Diplomacy, I felt a justified sense of pride

Since spending a year studying at the University of Madrid in 1968/69, I have nurtured the belief that it is travel that truly affects world peace through knowing and sharing one on one relationships between people to people.  When the Berlin wall came down, it further affirmed that belief.  We had clients that traveled to Russia in the 70’s when it was almost a clandestine adventure totally controlled (the Russians thought!) by the Russian government.

These clients carried with them stories and books that they shared with the people they met everywhere on their travels.  This was done at considerable risk back then, if caught and accused by the system.  During that same time frame and prior, Russian athletes, Chess Masters, a selected few musicians and the Moscow Ballet were among the few allowed outside Mother Russia. Some, if they had no family to endure the brunt of the proletariat, defected to the West.  It was usually part of this interface brought about by travel and later internet that eventually led to the Berlin Wall becoming outdated.  I am sure we could all go on recalling instances where the one on one relationships formed while traveling, have affected our lives and in return, the lives being lived around the world.  So, how can we capitalize on this force and make it even more powerful and effective?

Perhaps one answer is to empower travelers to view themselves as diplomats representing their home countries!

That was the focus before a Nov. 16 panel in Washington, DC discussing the role of travel and tourism in expanding citizen diplomacy. Virtuoso CEO Matthew Upchurch was one of the panelists examining the role of international tourism as the biggest potential force assisting citizen diplomacy. Being a member of Virtuoso, The Travel Agency is proud to know that our organization is being closely affiliated with this effort to empower our travelers as true ambassadors of this amazing country wherever they might wander!

The panel was part of a four-day event – the first annual U.S. Summit for Global Citizen Diplomacy. The summit was sponsored by the U.S. Center for Citizen Diplomacy ( http://uscenterforcitizendiplomacy.org/ ) in collaboration with the U.S. State Department. It addressed how U.S. citizens can play a larger role in tackling vital global issues including the environment, poverty, disease, human rights, and hunger.

The goal was to support the non partisan efforts of U.S. President Obama and Secretary of State Hillary Clinton to make global citizen diplomacy a national priority and use new technologies to deepen the reach and opportunities for engagement. The summit’s guest list included academics, non-government organization leaders, luxury travel executives, representatives from multinational companies such as Coca-Cola, and diplomats – totaling 600 people from 41 countries.

“I love the idea of a passport being accompanied by a letter from the U.S. president talking about the concept of citizen diplomacy,” Upchurch told USA TODAY. “We’re all ambassadors of our country, and concepts always grow when they’re given a name. Citizen diplomacy is a very powerful concept.”  This concept would target the approximately 14 million people who receive a U.S. passport each year.

The Summit’s goal is to launch for a “Decade of Citizen Diplomacy” with a goal to double the number of American citizen diplomats by 2020 – from an estimated 60 million today to 120 million in ten years.
To read the complete USA TODAY article on the Summit, please click here.