Trickery and Thievery vs Creative Campaigning

This is at the same time a funny and deeply sad story, as it describes perfectly how double standards have become the norm. 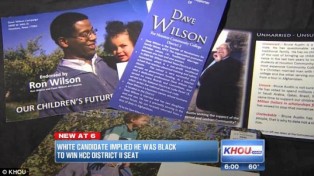 This is enough to fool people into thinking that it concerns a black person?

Amidst the “headline news” this morning that an Act of Thievery gives the Jaguars their first win of the season and Atheists form a church to find camaraderie, there is a jewel of a piece of news in the reporting of a white guy narrowly winning a Houston schoolboard election by running a campaign that smartly implies that he is black (or should I say African American?).

Dave Wilson, a Houston Texas electrician, who previously came in the news for mailing out homophobic fliers to Houston voters against the city’s lesbian mayor, beat a 24 year incumbent with a campaign that apparently suggested to voters that he was black.

Normally I wouldn’t give a moment’s notice to a man who’s also painted by the media as an Anti-Gay activist since I have no patience for homophobic behavior. But after reading this story I wonder if the man was simply using the “Devil’s Advocate” persona to expose a huge variety of human stupidity. And then again for a state that can put someone like Ted Cruz  into the senate and believes his dad’s concocted life story, anything is possible.

And Dave Wilson chuckles as he talks about his unorthodox political campaign that ousted a 24 year long incumbent, who’d obviously had already called victory. “I’d always said it was a long shot,” Wilson was reported to have said. He didn’t expect to win, instead he figured he’d have fun running, because he was fed up with what he called “all the shenanigans” at the Houston Community College System.

Now leave it to the media to discredit the fact that the man is wonderfully original by labeling a strategy that apparently did not need a picture of him and including a clever move to have a cousin who carries the same name of a well known black politician in the district endorse him, a tricking voters.

For me this exposes the media as two-faced and trickery. Don’t tell me that they did not lay eyes on this campaign way ahead of the elections. Don’t tell me that the incumbent opponent of this man did not realize that this was an “impersonation” campaign long before voters went to the booth. If no one in his district warned him about this, he was doing something terribly wrong. What the media now imply however, is that apparently Voters are so blasé and ignorant these days, that they can be fooled into believing anything politicians throw at them.

To the contrary I think voters saw through it all and decided to upset the apple cart because it needed to be done. After all, serving 24 years on a schoolboard(?) smells like manipulative abuse of democratic principles and a guarantee that shenanigans will run rampant.
Of course I don’t know the level of  dissatisfaction over the satisfactory performance of this schoolboard in Houston, because I question the need for yet another level of political manipulation that is operated by tax payer money but my congratulations go to Mr. Wilson. I do not endorse his anti-gay stance, as it is part of the privilege of living in a democracy. But I do admire his creative ‘tongue in cheek’ election campaign. What I endorse even more, is the way it exposes the role of manipulative media in our severely crippled democracy and how their laziness to expose factual information has rendered them obsolete.

Here is a candidate, whose approach to political attraction was so full of holes in an era of internet, instant communications, cell phones, personal web pages etc. that anyone with an interest, could have blown it wide open. Yet, no one treated it as news until probably the loosing incumbent with a failing track record started whining that life is unfair if a white dude with a sense of humor and a fight to pick, upsets his 24 year tenure.

I encourage you to watch the following video and witness with your own eyes and ears how incredibly complicated we have become and how little the above story has to do with racism as much as it has to do with double standards.