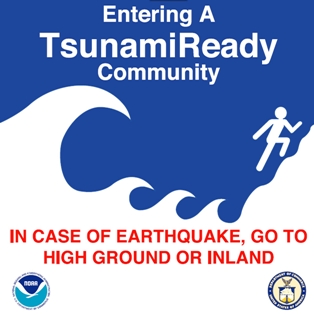 Tsunami warning test messages for the Atlantic coasts first began broadcasting over radio and television in April 2009. This was the first tsunami warning test to include the Atlantic and Gulf of Mexico coasts of the Unites States and her Canadian and Caribbean neighbors. The United States expanded preparedness activities and its tsunami warning system in 2005 after a devastating tsunami in the Indian Ocean struck with little or no warning killing 230,000 people in December of 2004.

The East Coast of the United States is considered at low risk for tsunamis, and SearchAmelia published an article to that effect in February Putting North Florida Tsunami Fears in Perspective, so we are not as educated about the risk as other parts of the world. The Indian Ocean region, too, was considered to have a relatively low risk for a destructive tsunami!

In April 2010, The United States Government Accountability Office reported on tsunami preparedness, “Although the number of Tsunami Ready communities has increased from 27 in 2006 to 74 as of February 2010, overall participation in this voluntary program remains relatively low among the more than 760 communities identified as at risk for a tsunami.” In the full 39 page report, Florida has 37 at-risk communities and only 2 are tsunami ready! We live on Amelia Island and residents and visitors to any coastline are encouraged to prepare personal tsunami plans.

I found this video about tsunamis that was made for children by San Diego County, California. In this video an animated crab teaches students valuable Tsunami preparedness information, such as tsunamis may travel at speeds up to 600 mph, and there are warning signs you should know. While this video is great for the kids in your life, because many of us know very little about tsunamis, I thought the video shared some very interesting information for parents and grandparents, too. Even though I am a little older than its intended demographic, I don’t think the tsunami safety song will ever become a top 40 hit! (The video is not as long as indicated. After the five minute mark you get a song and the last minute and a half are scrolling production credits.)