‘Twas Another Month Before Christmas

Egged on by their parents, the kids had one aim, to get to the man who was using my name. They mobbed and they mauled him, the better to plead, for the presents they sought in their hour of greed. 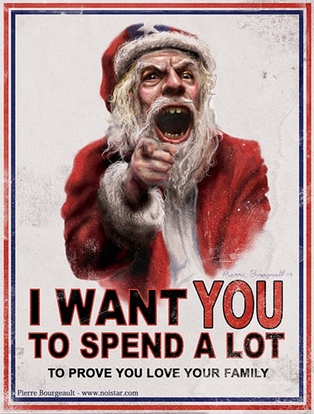 ‘Twas the month before Christmas, and all through the store,
Each department was dripping with Yuletide decor.
The Muzak was blaring an out-of-tune carol,
And the fake snow was falling on “Ladies’ Apparel.”

I’d flown many miles from the North Pole this day,
To check on reports which had caused me dismay.
I’d come to this store for but one special reason,
To see for myself what went on this Season.

I hid in a corner and in a short while,
I saw the Store President march down the aisle.
He shouted an order to “Turn the tree on!”
And also lit “NOEL” in blinking neon.

The clock on the wall said two minutes to Nine,
The floorwalkers proudly all stood in line.
I watched while the President smelled their carnations,
Then called his command to – “Man Your Stations!”

When out on the street there arose such a roar,
It rang to the rafters and boomed through the store.
It sounded exactly like street-repair drilling,
Or maybe another big Mafia killing.

I looked to the doors, and there banging glass,
Was a clamoring, shrieking, hysterical mass.
And I felt from the tone of each scream and each curse,
That the “Spirit Of Christmas” had changed for the worse.

The clock it struck Nine, and the door opened wide,
And that great human avalanche thundered inside.
More fearsome than Sherman attacking Atlanta
Came parents and kiddies with just one goal – “Santa!!”

In front stormed the mothers, all brandishing handbags,
As heavy and deadly as 20 pound sandbags.
With gusto they swung them, the better to smash ears,
Of innocent floorwalkers, buyers, and cashiers.

Egged on by their parents, the kids had one aim,
To get to the man who was using my name.
They mobbed him and mauled him, the better to plead,
For the presents they sought in their hour of greed.

The President watched with a gleam in his eye,
As he thought of the toys that the parents would buy.
Of all Christmas come-ons, this crowd would attest,
That a visit to “Santa” was clearly the best.

It was all too much for my soul to condone,
And I let out a most unprofessional moan.
The crowd turned around, and I’ll say for their sake,
That they knew in an instant I wasn’t fake.

“I’ve had it,” I told them, “with fast-buck promoting,
With gimmicks, come-ons and businessmen gloating.
This garish display of commercialized greed,
Is so very UN-Christmas, it makes my heart bleed!”