Two Bridges to the Mainland

I have often crossed over both Amelia Island bridges and wondered about their history and the men that they are named for. 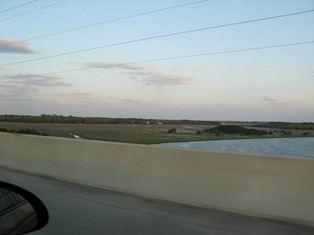 As we all know, there are two bridges that connect Amelia Island to the mainland, the bridge over the Intracoastal Waterway, named for Thomas J. Shave Jr. and the George Crady Bridge on the south side of the island.

Thomas J. Shave Jr. was a local attorney and Judge on the island. He died in 1977 and on April 20, 1978, the Florida Senate introduced by Special Order, Senate Bill 434, designating the newly constructed bridge on State Road 200 (A1A) as the Thomas J. Shave Jr. Bridge.

The other bridge connects the southern end of Amelia Island to Talbot Island. It is one-mile long and was constructed in 1999. It is named for George Crady, a local Florida State Representative and great supporter of Florida State Parks. A longtime resident of Yulee, Mr. Crady is an avid fishing enthusiast as well. The “old” bridge, constructed in 1948, is located just west of the new one and is used as a pedestrian fishing pier. It is part of George Crady Bridge Fishing Pier State Park. This state park is known for having some of the best fishing grounds in Florida. The fishing bridge is open 24 hours a day and is often crowded with fishermen.

Living here for almost 13 years, I have crossed over both of these bridges countless times and often wondered about their history and the men that they are named for. These two bridges connect our paradise island with the rest of the world and the men they were named for are responsible in different ways for making this place that we love what it is today.