When a traditional American holiday is replaced by a new religious one, no matter what faith is involved, it will catch my attention! 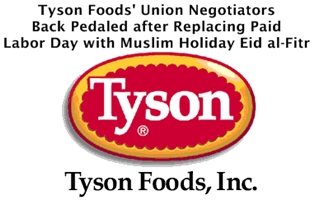 Tyson Foods eliminated the paid Labor Day holiday in favor of a day for the Muslim celebration of Eid al-Fitr. This happened in 2008, and I didn’t hear a word about it until now.

As you can imagine, I receive a ton of emails. Some are quickly discarded after a good chuckle and others, well they make me sit up and take notice. When a traditional American holiday is replaced by a new religious one, no matter what faith is involved, it will catch my attention!

I was surprised when I learned that this was indeed a true event. As it turns out, the Retail, Wholesale and Department Store Union in Shelbyville, Tennessee, where Tyson Foods has a poultry processing plant, opted to trade the American holiday for a Muslim one. Fox News reported on the story August 5th of 2008, “Tyson officials said that approximately 250 of the plant’s 1,200 employees are Somalis who entered the United States as political refugees. Most, if not all, are believed to be Muslim — among them, Abdillahi Jama. ‘This new contract is good because it allows me to work on the second shift and still pray when I need to,’ Jama said in the union’s press release. ‘It’s very important to us, and the Eid is one of our most sacred holidays. It shows how the union helps us.”

Needless to say, when news of the holiday change spread over the world wide web, it prompted some emails that encouraged readers to boycott Tyson products.

So, I wanted to know what Tyson had to say about the issue and found this press release, dated three days after the Fox News report, on their website. Here it is in its entirety.

Labor Day Reinstated as Paid Holiday at Shelbyville, TN, Plant
“Springdale, Arkansas – August 8, 2008 – Tyson Foods, Inc. announced today it has reached a new agreement with the Retail, Wholesale and Department Store Union (RWDSU), an American union, reinstating Labor Day as one of the designated paid holidays under the contract for covered employees in the Shelbyville, Tennessee, plant.

Tyson made this request on behalf of its Shelbyville plant employees, some of whom had expressed concern about the new contract provisions relative to paid holidays. In an effort to be responsive, Tyson asked the union to reopen the contract to address the holiday issue, and the union agreed to do so. The union membership voted overwhelmingly Thursday to reinstate Labor Day as one of the plant’s paid holidays, while keeping Eid al-Fitr as an additional paid holiday for this year only. This means that in 2008 only, Shelbyville employees will have nine paid holidays.

For the remainder of the five-year contract period, the eight paid holidays will include: New Year’s Day, Martin Luther King Day, Memorial Day, Independence Day, Labor Day, Thanksgiving Day, Christmas Day and a Personal Holiday, which could either be the employee’s birthday, Muslim holiday Eid al-Fitr or another day requested and approved by their supervisor.

This issue concerns only the plant at Shelbyville, Tennessee. Labor Day has always been celebrated, and continues to be, at the other 118 Tyson plants across the country.

The Shelbyville complex employs approximately 1,200 people. Approximately 1,000 workers are covered by the RWDSU union agreement at that location.”

Sometimes, corporations do step in to correct misguided union officials!