Updates on the Eve of the 5th Annual Pétanque Tournament

In the News, Petanque

Even if you don't have too much time this weekend, keep your calendar open for the SHOOTING CONTEST between the 5 World Champions sometime around 5pm on Saturday. 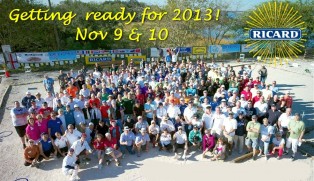 Already the 5th Annual Pétanque America Open Tournament, as the French Provincial (Provence) ball game has taken Amelia Island by storm. The local Boule Club became the largest club in the US, exactly one year ago and registration of the tournament had to become selective with only space for 256 players or 128 teams.

And as usual when space becomes premium, the quality goes up. And mark this, not only registration had to be closed 2 months ahead of the tournament (Sept. 13), we’re also welcoming 5 WORLD CHAMPIONS, who collectively won every other title in the sports -Marco Foyot (1992), Claudy Weibel (2000), Dylan Rocher (2012), Jean-Francois Hemon (2000).

The Program starts with

TIP: If you don’t have too much time to spend this weekend, then open your calendar up for the SHOOTING CONTEST between the 5 World Champions sometime around 5pm on Saturday. We promise your jaw will drop!