Florida is to receive two new National Cemeteries according to a recent press release from the Department of Veterans Affairs. 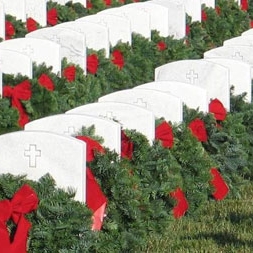 Florida is to receive two new National Cemeteries according to a recent press release from the Department of Veterans Affairs. This annoucement comes as the Civil Air Patrol organizes wreath-laying ceremonies for the 7th year of Wreaths Across America.

WASHINGTON DC– “We are pleased to expand burial service to families in the Sunshine State where so many Veterans live,” said Secretary of Veterans Affairs Eric K. Shinseki. “Acquiring this land is a key step forward in bringing these national shrines to Florida.”

VA plans to construct one of the cemeteries in central eastern Florida between the cities of Daytona and Melbourne, and the other in northwestern Florida, in the Tallahassee area. Together, the facilities will serve an estimated population of 247,000 Veterans and family members who are not currently served with an open national, state or tribal Veteran’s cemetery within 75 miles of their residence.

VA completed acquisition of the central eastern Florida property on July 31 and paid $2 million for 318 acres of land. The property, formerly known as Acosta Groves, is located on U. S. Route 1 in northern Brevard County in Scottsmoor, approximately two miles from Interstate 95.

VA purchased the Tallahassee property for $6.8 million on Aug. 14. The 250-acre parcel is in Leon County with frontage along U.S. Highway 27 (Apalachee Parkway). VA purchased the land from the St. Joe Company, one of Florida’s largest real estate development firms. The cemetery will also serve Veterans in southwestern Georgia and southeastern Alabama.

Florida National Cemetery in Bushnell opened in 1988 and is now the second busiest VA national cemetery in the country with 6,728 interments completed in fiscal year 2011. Of VA’s 131 cemeteries across the nation, the state of Florida is home to six national cemeteries that rank among the top 32 busiest by interment workload.

Barrancas National Cemetery in Pensacola, established in 1868, serves Florida’s western panhandle and southern Alabama. A recent expansion of the historic cemetery ensures that it will remain open with a full range of burial options for decades to come.

Veterans with a discharge issued under conditions other than dishonorable, their spouses and eligible dependent children can be buried in a VA national cemetery. Also eligible are military personnel who die on active duty, their spouses and eligible dependents. Other burial benefits available for all eligible Veterans, regardless of whether they are buried in a national cemetery or a private cemetery, include a burial flag, a Presidential Memorial Certificate and a government headstone or marker. Families of eligible decedents may also order a memorial headstone or marker when remains are not available for interment.

In the midst of the largest expansion since the Civil War, VA operates 131 national cemeteries in 39 states and Puerto Rico and 33 soldiers’ lots and monument sites. More than 3.8 million Americans, including Veterans of every war and conflict, are buried in VA’s national cemeteries on more than 20,000 acres of land.

Information on VA burial benefits can be obtained from national cemetery offices, from the Internet at www.cem.va.gov, or by calling VA regional offices toll-free at 800-827-1000. To make burial arrangements at any VA national cemetery at the time of need, call the National Cemetery Scheduling Office at 800-535-1117.