It takes several days to recover from the Shrimp Festival and while I was editing this video, it was easy to see why. 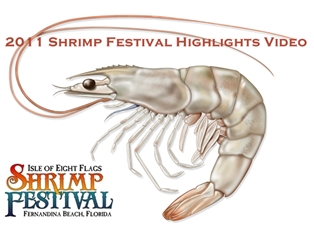 It takes me several days to recover from the Isle of Eight Flags Shrimp Festival and while I was editing the following video, it was easy to see why.

Having been a member of the Fernandina Pirates Club for 20 years, and off and on the Shrimp Festival committee for just as long; I am still amazed each and every year at just how much the festival has to offer. Not only do I have all of the images and video to sort through, edit and publish, but I also have four days worth of pirates costumes to wash for our entire family. Unfortunately, many of these costumes and accessories are hand-wash only! Not to mention cleaning my black powdered gun, and polishing the boots, buckles and weapons.

One of my favorite obligations at the festival is working the shuttle bus stop as a pirate at the top of Centre Street, but I was having so much fun playfully harrassing festival attendees as they arrived, I missed the opportunity to capture any of this on video. The smell of shrimp being cooked at the waterfront food booths tempted me during opening ceremonies, but it wasn’t until I was backstage before the Friday night Pirate Invasion that I finally shared a basket of fish and shrimp with my husband in the dark… and while it was delicious, there simply was not enough light to catch the rising steam of the freshly cooked fare.

We get mobbed walking the street in a pirate costume at Shrimp Festival and it is tons of fun! So, as best as we could with camera and video in tow, we captured the highlights of this extremely long weekend and compiled them into this Summary of Shrimp Festival 2011.

Maybe next year I’ll take my laptop and the Mac so we can set up shop in a room downtown for nearly instant access to freshly charged batteries. A quick dumping of newly captured video and still shots from the memory cards could be done while we get refreshed with a cup of coffee, a change of pirate costumes and grab more beads for the kids! Ah, the life of a modern day Pirate indeed!

Watch for the new icon at the top of SearchAmelia’s website (or CLICK HERE) where you will conveniently find all of the videos we have been publishing from the many different events of this year’s festival, in one single location.

We hope you enjoyed our coverage of the 2011 Isle of Eight Flags Shrimp Festival!