Voting, Politicians, and the Salaries they Get Paid

Typically, I do not vote for the professional politicians. If you live the lifestyle of a politician for too long, how can you still relate to the "common" folk?

You know it is election time because everywhere you look it is shoved in your face. From yard signs and bumper stickers, to billboards and television commercials, you just can’t escape the “noise”.

I vote, I have always voted, and God willing, I will always be capable of voting – it is my right and I choose to believe my vote counts!

Sorting out the options to select a candidate takes a little research on my part. I want to be confident that I’m selecting the names that best reflect my views. When I choose a candidate, I hope to select a leader – not someone who hops on this bandwagon, or that bandwagon, I am voting for “leaders” to help “lead” MY country in the best direction.

I will be voting in person, at my precinct, on August 30th, so I don’t have a lot of time to finish making my decisions.

Typically, I do not vote for the professional politicians. If you live the lifestyle of a politician for too long, how can you still relate to the “common” folk?

According to a document found on senate.gov, “The most recent pay adjustment for Members of Congress was in January 2009. Since then, the compensation for most Senators, Representatives, Delegates, and the Resident Commissioner from Puerto Rico has been $174,000.” The salary for a few others, Speaker of the House and House Leaders, for example, is higher. Representatives also receive a Members’ Representational Allowance (MRA) to support their official duties such as $944,671 for personnel, a variable amount of official office expenses, and official mail. “The 2014 allowances ranged from $1,195,554 to $1,370,009, with an average MRA of $1,255,909.” The same document stated.

When we vote, we often times are electing someone to receive one hell of a paycheck!

Local level politicians are paid using a state mandated formula, based on the relevant population of their district, to calculate salaries. Florida’s elected officials and full-time members of commissions have set salaries ranging from $45,000 for Public Employees Relations Commission Commissioners, to $130,000 for the Governor.

Take a look at this chart… (click on the image to enlarge it) no wonder we have professional politicians! (Some salary figures may not reflect any special qualification salary available or performance salary incentives. That research is above MY pay-grade.) 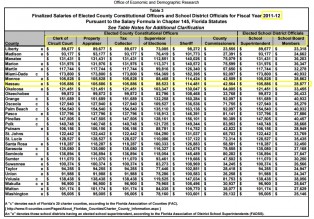 When I am selecting candidates to vote for on a local level, I find it amusing to look at the relationships between the politicians; past, present and potentially future. Some connections are obvious like Nassau County Sheriff Bill Leeper and his brother Danny Leeper who is running for County Commission. Others, are not so obvious, but maybe I’ll save that for another article.

Please vote on August 30, 2016, but take the time to learn about each candidate before you cast your ballot; I know I will!